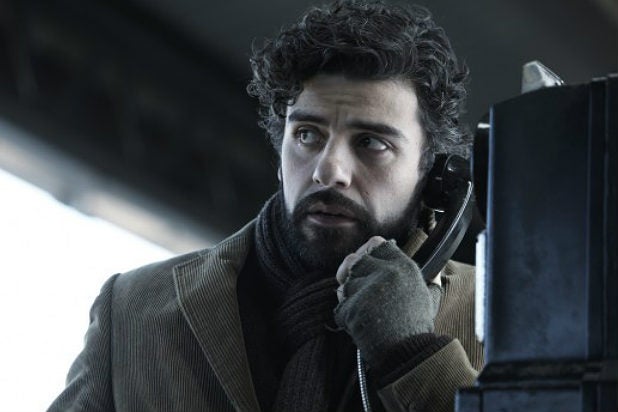 The film drew rave reviews at the Cannes Film Festival in May, and the win comes at a fortuitous time for distributor CBS Films as the movie opens in limited release this weekend.

Isaac has also drawn raves for his work, though Matthew McConaughey and Brie Larson won the top acting awards Monday night — McConaughey for his performance in “Dallas Buyers Cub” and Larson for her starring turn in “Short Term 12.”

Steve McQueen’s “12 Years a Slave” had gone into the show with more nominations than any other film, but it did not win any awards.

“Fruitvale Station” took home the most awards of the night, two, with Ryan Coogler and Michael B. Jordan winning breakthrough awards for directing and acting, respectively.

Joshua Oppenheimer’s “The Act of Killing” was named the year’s best documentary, while “Life on Four Strings,” a nonfiction film about ukulele player Jake Shimabukuro, scored a surprise victory in the Audience Award category over “12 Years a Slave,” “Fruitvale Station” and the docs “Best Kept Secret” and “Don’t Stop Believin': Everyman’s Journey.”

The Gotham Awards typically stake out a distinctive turf and do not overlap much with other awards groups.  The Gothams winner has only gone on to win the Oscar for Best Picture once, when Kathryn Bigelow’s “The Hurt Locker” turned the trick four years ago.

Nick Kroll hosted the show, which was livestreamed online. Special awards were handed out to actor Forest Whitaker, director Richard Linklater and the late James Gandolfini.

Here is the full list of nominees, with winners in bold: