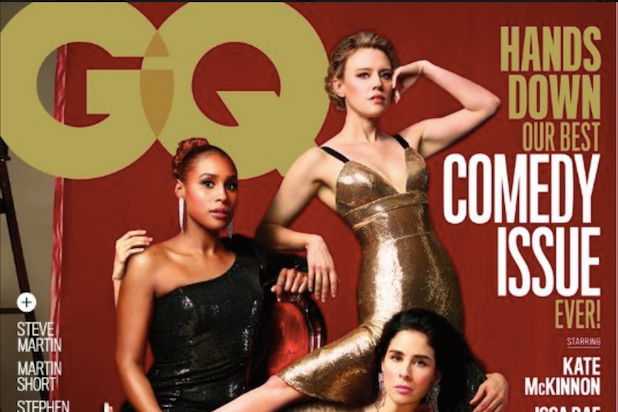 GQ decided to go in for a ferocious bit of trolling in its new recent comedy issue, releasing a cover that lampoons the much-maligned cover of Vanity Fair’s January Hollywood issue.

The GQ cover features comedians gown-wearing Kate McKinnon, Issa Rae and Sarah Silverman in a mangled mess of obviously PhotoShopped limbs — and bears a striking similarity to the Vanity Fair mashup of Oprah Winfrey, Reese Witherspoon and Nicole Kidman earlier this year that seemed to show an extra leg.

“We deeply regret what happened to the 2018 #GQComedyIssue cover,” said the magazine in a devilish tweet.

The accompanying article by the magazine drove the point home.

“GQ would like to apologize to Kate McKinnon, Issa Rae, and Sarah Silverman for the egregious mistakes made in the process of creating the cover for our 2018 comedy issue,” wrote the editors. “We deeply regret that the results violated GQ’s rigorous standards of editorial excellence and the laws of nature.”

“To you, our respected readers, we know that GQ must work doubly hard to earn back your trust. Until then, we’ll be ignoring our mentions,” they added.

In the photo used for the Vanity Fair cover, Witherspoon’s legs are crossed to one side, but the lighting and color of her dress led some to believe that the magazine composited two shots and forgot to remove a visible extra leg. The magazine, however, insisted the flesh-toned portion of the photo is simply the back of her dress.

More damning, however, was a behind-the-scenes photo of Winfrey and Witherspoon on set in which Winfrey appears to have one hand on her hip, one in her lap, as well as a surprise third hand around Witherspoon’s waist.

Needless to say the internet had a field day with the GQ cover, as wags, pundits and blue checks all tried to get in on the fun.

"We deeply regret that the results violated GQ's rigorous standards of editorial excellence and the laws of nature.” https://t.co/wrKYxbeDkW

Who says times are tough in publishing? This shoot must’ve cost @GQMagazine an arm and a leg. And an arm. And a leg. https://t.co/7B4qdQN9Hp

"To demonstrate our commitment to transparency, we will release the results of the review, quietly, in 17 months, on Medium." https://t.co/BiyyVUNjWh

This is just perfect. https://t.co/o9Usi5dFii