There’s little question over what the legacy of the Sony hack will boil down to: ‘The Interview” and North Korea are likely to dilute in the narrative  — but those leaked emails are forever.

Over 170,000 pieces of digital correspondence between SPE’s top executives like CEO Michael Lynton and former Motion Picture Group chairman Amy Pascal, industry players like Scott Rudin and stars like Rooney Mara have been archived on Wikileaks — an indexed, searchable monument to a major corporate embarrassment.

Here the TheWrap compiles some of the most scathing, hilarious, terse and ridiculous highlights from Sony inboxes, what will undoubtedly be regarded as a vivid portrait of living and working in Hollywood in 2014. 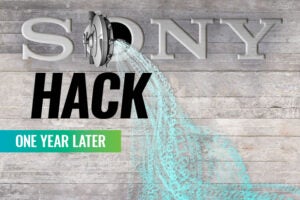 1. Scott Rudin rips into Angelina Jolie
In December, leaks revealed producer Scott Rudin having harsh words about Angelina Jolie, and uncovered his distaste for the actress-turned-director. “Kill me please. Immediately,” he said in an e-mail to Pascal in June 2014 when he learned she was studying films of potential directors for a “Cleopatra” film in development.

In another email, also about “Cleopatra,” Rudin said, “I’m not destroying my career over a minimally talented spoiled brat who thought nothing of shoving this off her plate for eighteen months so she could go direct a movie. I have no desire to be making a movie with her, or anybody, that she runs and that we don’t. She’s a camp event and a celebrity and that’s all and the last thing anybody needs is to make a giant bomb with her that any fool could see coming.” 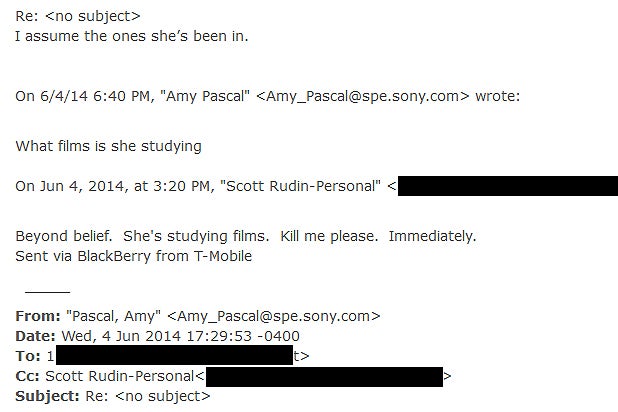 2. Rooney Mara asks Amy Pascal about “Girl With the Dragon Tattoo” sequel
Even Rooney Mara is tired of Sony’s maybe, maybe-not stance about sequels to its “Girl with the Dragon Tattoo” adaptations. “Logic tells me they are not ever happening- as it’s been almost 3 years since it came out,” she acknowledges in an email to Pascal in October 2014. “But I had still been holding out a little bit of hope.” 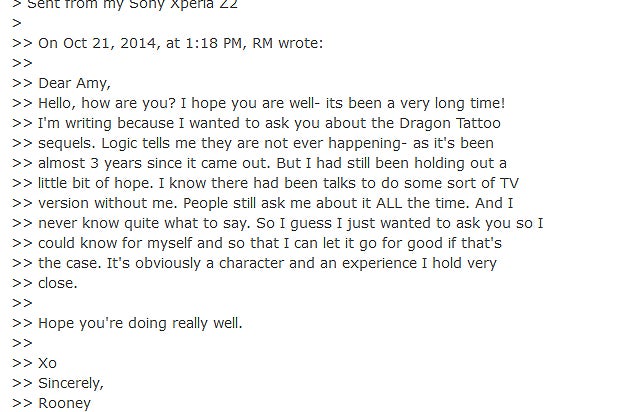 3. David Fincher thought Sony had a leak problem
In an e-mail with the subject line “Well it ain’t ME,” the man who almost directed “Steve Jobs” blamed Sony for the many leaks on the negotiations for that film. In comparison, his work on the Warner Bros. thriller “Gone Girl” seemed to proceed with considerably more discretion. “I had 15 meetings with Rosamund Pike and her DEAL CLOSED before Variety OR The Reporter ever ran a single blurb,” he said. “This is a CONTINUAL PROBLEM WITH SONY.” 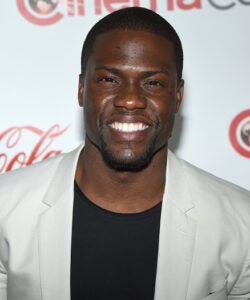 5. Kevin Hart was called a “whore” by Clint Culpepper
Documents obtained by Defamer revealed a March 2014 thread between Sony executives Amy Pascal, Michael Lynton and Screen Gems President Clint Culpepper. The three complain about an upcoming Hart movie, specifically that Hart’s team requested more money to utilize his 14.4 million followers on Twitter and other social platforms to promote the film.

While Hart’s team said he would happily do the normal publicity rounds like junkets and photo calls, the emails hinted that he wanted additional compensation to pitch the movie on social media. “I’m not saying he’s a whore, but he’s a whore,” Culpepper wrote.

After the leak, Hart wrote a lengthy response on Instagram.

“Knowing your self worth is extremely important people … I worked very hard to get where I am today. I look at myself as a brand and because of that I will never allow myself to be taking advantage [sic] of. I own my brand … I make smart decisions for my brand … I protect my brand … which is why I’m able to brush ignorance off of my shoulder and continue to move forward. I refuse to be broken people…with that being said its now time for me to get back to building this empire that I’ve always dreamed of.”

The studio boss was not impressed by Leonardo DiCaprio, who dropped out of the lead role in “Steve Jobs“ simply because he changed his mind.

Shark Mark Cuban was not happy with the $30,000 he was getting for every episode of “Shark Tank,” a show distributed by Sony Pictures Television. Therefore, the Dallas Mavericks owner sent an email to Sony Pictures TV president Steve Mosko and others with the following:

I will negotiate like any other deal I would do

you may want to start cutting me out of the promos

Long before Sorkin and Fassbender were to work on “Steve Jobs” together, the writer had no idea who the actor was, and wasn’t having it when Pascal informed him of the studio’s desire to cast him in the lead role of “Steve Jobs.”

“I don’t know who Michael Fassbender is and the rest of the world isn’t going to care,” Sorkin wrote.

Producer Michael De Luca, however, seemed to be a fan of the Irish-German actor — perhaps because of his attention-grabbing frontal-nude scenes in “Shame.” In one email, De Luca wrote, “He just makes you feel bad to have normal-sized genitalia.”

When DreamWorks Animation CEO Jeffrey Katzenberg was set to host a breakfast that President Barack Obama was going to attend, Pascal wrote Rudin, “What should I ask the president at this stupid Jeffrey breakfast?”

“Would he like to finance some movies,” Rudin responded.

Pascal replied, “I doubt it. Should I ask him if he liked DJANGO?” Rudin responded: “12 YEARS.” Pascal mentioned more movies cast with African-Americans: “Or the butler. Or think like a man? [sic]”

“Did you have something to show me this week?” Pascal asked the director.

“Does Bruce Jenner want boobs? Hell yes I have something to show you!!!!” responded the director of “Almost Famous.”

Last November, Sony Motion Pictures Group PresidentDoug Belgrad sent Tom Rothman, then heading up the TriStar division, a link to a New York Times article about Willow and Jaden Smith, the celebrity offspring of Will Smith and Jada Pinkett Smith, which was then forwarded to Amy Pascal. Rothman wrote, “1. Read this,” and “2. they r home schooled: don’t let this family date your movies!!!” 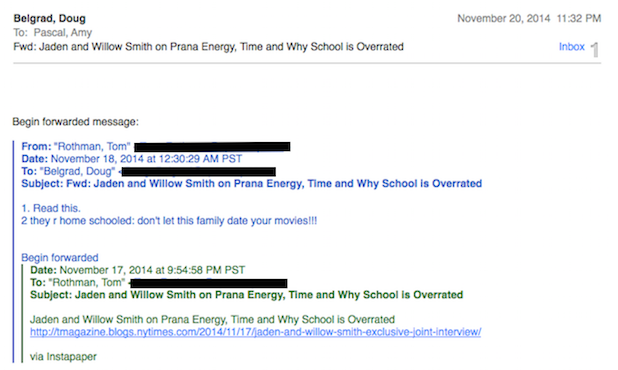 In another set of emails in which discuss “Cleopatra,” Jolie responds to a list of potential directors, including Tomas Alfredson (“Tinker Tailor Soldier Spy”).

She wrote, “Do we know who on the list is actually available to begin prep in next few months? I do think [Tomas] alfredson is great. I also think we could have another talk with Fincher who may be difficult but is brilliant and already engaged. Xxx”

“‘May be difficult’?!?! ” Rudin responddd. “Like Hitler ‘may be anti-Semitic’!!!  I think a lot of these guys are free around our time-frame — who do you like?” 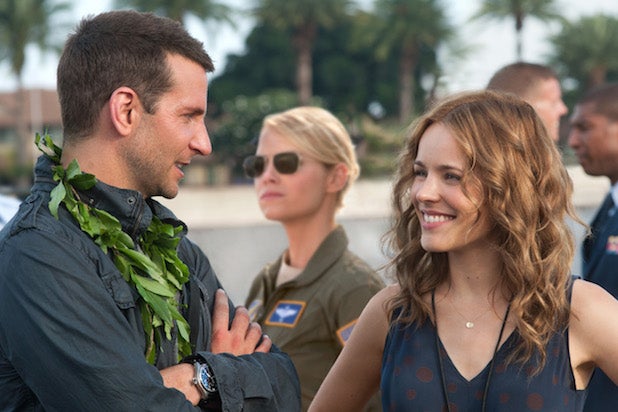 The film went on to gross an embarrassing $26 million worldwide.

apparently annoyedwhen he decided to shop a project called “Molly’s Game,” based on a memoir by a skier turned poker impresario named Molly Bloom, to other studios. In addition to “The Social Network” and “Moneyball,” the studio was then developing the Sorkin-scripted “Steve Jobs” (which later went to Universal) as well as “Flash Boys,” based on a book by “Moneyball” author Michael Lewis.

Pascal took to writing an enraged email to Belgrad, De Luca and Hannah Minghella, the co-presidents of production at Columbia Pictures.

“We are getting totally positioned in the Aaron stuff,” Pascal wrote. “He is broke. He wants to get paid. We paid him his insane fee on flashboys. When the poker movie came around we didn’t want to not be in Aaron business so we wanted that too. after social network jobs and flashboys Aaron and mark took the project to the town on the ‘pretense’ that we don’t have the money. They went to every single studio…I don’t care if Aaron is sleeping with the girl or not. I don’t care if it becomes a best seller. They are treating us like s–t.”