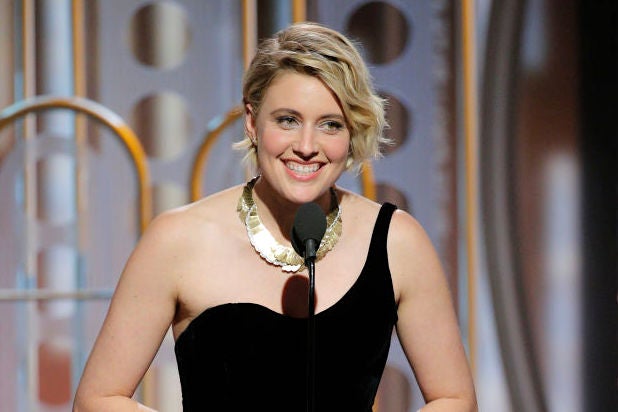 There’s good news and bad news, “Lady Bird” fans. The good: Your new favorite movie took home one of the biggest awards at the 2018 Golden Globes. The bad: Its director, Greta Gerwig didn’t even get a nod in the director category. Ouch.

On Sunday, Gerwig’s critically-acclaimed comedy-drama grabbed a statue for Best Motion Picture, Musical Or Comedy, and she, who has been praised for her solo directorial debut time and time again since it bowed last fall, accepted it graciously with her team. While the victory was clearly a sweet one (and also surprising, with “The Disaster Artist” and “Get Out” deemed frontrunners) it only underlined the fact Gerwig didn’t arrive Sunday with a director nomination.

The director’s category was full of only male nominees, with the award ultimately going to Guillermo del Toro for “The Shape of Water.” Martin McDonagh was nominated for “Three Billboards Outside Ebbing, Missouri,” Christopher Nolan for “Dunkirk,” Ridley Scott for “All The Money in the World” and Steven Spielberg for “The Post.”

Gerwig was seen nodding in agreement when Barbra Streisand, who is the only woman to win a Golden Globe award in any directing category ever, announced as she presented an award: “Time’s up,” Streisand arguing it’s past time for women directors to be recognized.

The movie started trending hard on Twitter after its win.

See the best reactions to the victory (and Gerwig’s snub) below.

So, #GoldenGlobes , you're telling me #LadyBird is the best film of 2017. It had the best actress. But Greta isn't even nominated as best director? Smh.

How can #LadyBird win best picture and best actress and Greta not be nominated for best director?!?! #TIMESUP #goldenglobes

#LadyBird was written and directed by a woman. And it is a damn good film. This is important. This is inspiring. This is the future.