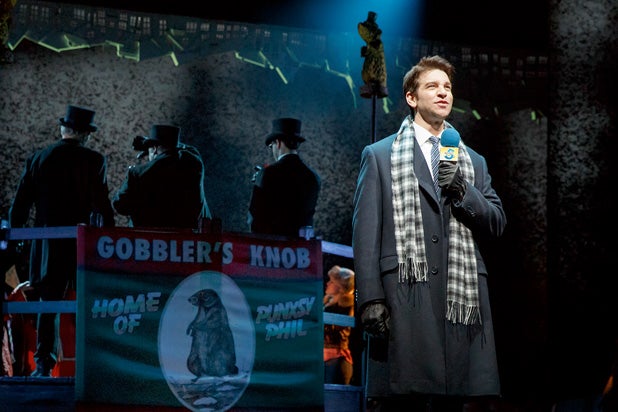 Lead actor Andy Karl injured his knee during a critics’ preview of the Broadway musical “Groundhog Day” Friday night, three days before a scheduled Monday opening that may now be postponed.

On Saturday, the show’s producers canceled the Saturday matinee and announced that understudy Andrew Call would step in for Karl at Saturday night’s performance as weatherman Phil Conners, a role originated by Bill Murray in the beloved 1993 big-screen comedy on which the musical is based.

There are no performances scheduled for Sunday but a show spokesman said, “The production is currently scheduled to open on Monday.”

On Friday, Karl was performing with the show’s ensemble in an elaborate dance number, the show’s third to last song, when he seemed to fall or slide into a piece of prop downstage left. The actors stopped the number, the lights went dark on stage, a curtain dropped and a house manager came on the sound system with the alarming request, “Is there a doctor in the house?”

After a roughly 25-minute pause, the performance resumed with Karl center stage holding a walking stick and visibly avoiding putting pressure on his left leg. He completed the show, even offering an ad-lib joke to his romantic co-star Barrett Doss, “Hurry up — what, did you hurt your leg or something?”

He appeared to be choking back tears at the curtain call, when the audience gave him a hearty standing ovation.

In an Instagram post on Saturday morning, Karl said he had hurt his knee and would be seeing another doctor after an ER visit after Friday’s show. “I’m home now and I have no broken bones but tweaked my knee after a poorly landed leap frog,” he said.

It’s unclear if Karl will be well enough to perform at Monday’s opening night, which would jeopardize his chances at a third Tony Award nomination following nods for 2014’s “Rocky” musical (in which he had the title role) and in 2015’s “On the Twentieth Century.” The role is physically demanding, and the set includes a technically complicated bullseye of five turntables in the stage floor.

“Groundhog Day,” with a book by original screenwriter Danny Rubin and a score by “Matilda” composer Tim Minchin, is one of this season’s pricier new bets on Broadway with an investment of $17.5 million.