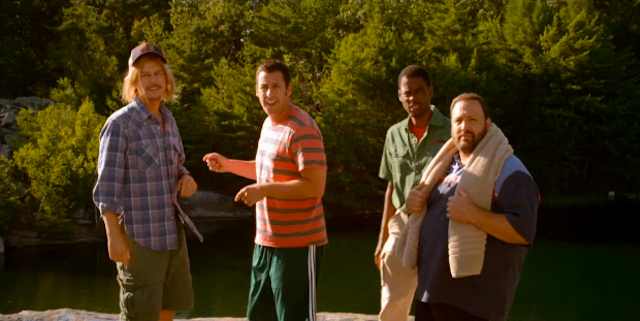 Adam Sandler and his buddies may be all grown up, but that doesn't prevent them from being bullied by frat boys in the first trailer for "Grown Ups 2."

In what appears to be a more risqué sequel, "Twilight" star Taylor Lautner leads a pack of college kids — hungry like wolves for public nudity — as they force Sandler, David Spade, Chris Rock and Kevin James to take naked dives into water beneath a cliff.

That's not the only trouble the gang, which no longer includes Rob Schneider, encounters while spending the summer in their rural hometown. Shaquille O'Neal holds them at gunpoint, Andy Samberg's gang of male cheerleaders sexually harass a car and a Moose takes a tinkle on Sandler's forehead.

The family fun begins on July 12. Watch the trailer: