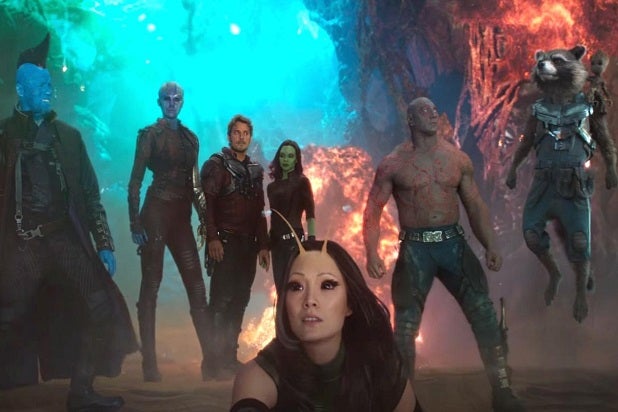 “Guardians of the Galaxy Vol. 2” will finish its opening weekend with the second $100+ million opening of 2017, with industry estimates putting the final total at $145 million.

That opening, which hits Disney’s pre-weekend projection range of $130-150 million, gives Disney the two biggest opening weekends of 2017 so far, along with the $174 million posted by “Beauty and the Beast” back in March. It is the 14th $100+ million opening posted in May since “Spider-Man” became the first movie to cross that mark 15 years ago. “Vol. 2” also ranks sixth among opening weekends for all Marvel movies, sliding between non-MCU titles “Deadpool” ($132 million) and “Spider-Man 3” ($151 million). “Vol. 2” also finishes with an opening 54 percent higher than that of its 2014 predecessor, which grossed $94.3 million.

Thursday preview totals are often combined with Friday totals when reported by studios, but when they are separated, they show a steady rise in numbers with $17 million on Thursday, $39 million on Friday and $51 million on Saturday. That steady increase shows how strong the word-of-mouth has been for “Vol. 2,” which has earned an 82 percent rating on Rotten Tomatoes and an A on CinemaScore, with fans discussing the best jokes and visual gags not long after the first preview screenings finished.

“Guardians” also opened up in several major overseas markets this weekend, including China and Korea, where it made a combined $61.3 million. In total, the film made $123 million internationally this weekend, bringing the global total to $427.6 million after releasing in 37 markets last weekend. The sequel also got the widest opening in IMAX history, rolling out on 1,088 screens in 69 markets. Those screens combined for $25 million, with $13 million coming from North America.

“Vol. 2” takes place approximately three months after the first film, as Star-Lord (Chris Pratt) comes face-to-face with Ego (Kurt Russell), the living planet who is his long-lost father and who reveals why he left Earth after falling in love with Star-Lord’s mother. The original cast is all back, including Zoe Saldana, Dave Bautista, Bradley Cooper, Vin Diesel, Karen Gillan and Michael Rooker. Pom Klementieff, Elizabeth Debicki and Sylvester Stallone also join the cast. James Gunn returns to write and direct and has signed on to do the same for a third installment. Marvel Studios president Kevin Feige is producing.

Also Read: 'Guardians of the Galaxy Vol. 2' Post-Credits Scene Explained: Who is 'Adam'?

Below “Guardians,” “The Fate of the Furious” and “The Boss Baby” both hit domestic milestones, with “Fate” crossing the $200 million mark with a $8.5 million fourth frame and “Boss Baby” crossing $150 million with a $6.2 million fifth frame. “How to Be a Latin Lover” comes in fourth, dropping 57 percent from its surprisingly strong opening weekend to finish with $5.25 million

Finally, “Beauty and the Beast” re-entered the top five with $5 million in its eighth weekend, bringing its domestic total to $487.6 million and pushing it past “Finding Dory” for eighth on the all-time domestic cume list. The worldwide cume for “Beauty and the Beast” is now at $1.18 billion, passing the $1.15 billion posted by “Captain America: Civil War” to reach No. 12 on the all-time list. It’s a testament to the popularity of the Disney remake’s original material and to how March has become fertile ground for releasing a megahit.