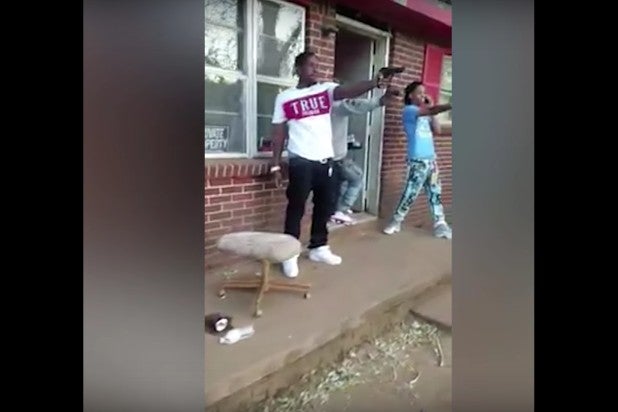 A group of 22 young men in Alabama participated in a gun-fight themed Mannequin Challenge, and it took a very serious turn.

According to the Washington Post, two men have been arrested on firearms and drug charges as a result of the latest attempt to mimic the internet craze.

The men re-created a scene that resembled a gun fight that included at least 19 real weapons. The video showed people hiding under cars, standing in front of doorways, behind trash cans and inside cars all while aiming guns in all directions.

Also Read: What the Hell Is the Mannequin Challenge? A Short Explainer

The video was posted to Facebook on Nov. 9 where it was shared over 85,000 times and clearly caught the attention of law enforcement.

Because of the nature of the video, The Madison County Sheriff’s department were able to get a search warrant for the property where the challenge was filmed.

Kenneth Fennell, 49, and Terry Brown, 23, were both arrested. Fennell was charged with first-degree possession of marijuana and possession of a firearm by a violent felon and Brown with possession of drug paraphernalia and loitering, according to AL.com.

The Mannequin Challenge requires participants to stay absolutely still while holding a pose — like, say, a mannequin — usually over Rae Sremmurd’s “Black Beatles” ft. Gucci Mane. Meanwhile someone else weaves in and out of the group capturing the dramatic poses.

It has since gotten so popular that celebrities and entire NFL teams have taken part in the challenge.