Got $20,000? You can get an entry level Mazda, or a pair of tickets to watch Lin-Manuel Miranda‘s final “Hamilton” performance on Broadway.

In comparison, tickets for the orchestra seats cost about half as much for the July 8 show.

Readers can keeping checking eBay for a better bargain, but that website doesn’t currently have anything for the specific date.

Orchestra tickets are considerably cheaper over on StubHub, though you’ll still have to shell out up to $5,000 apiece on that site for Miranda’s last performance

If you’re looking for a real bargain, VividSeats has a pair for you at just $4,596 per. Chump change.

After Miranda’s final curtain call at the Richard Rodgers theater, the “Hamilton” creator/star will head to Hollywood, where plenty of opportunities await him. Currently, the actor/rapper is in post-production on “Speech & Debate” and gearing up to star in “Mary Poppins Returns,” which is slated for 2018. In that movie, he’ll star opposite Emily Blunt, who will play the title character.

“Hamilton” was recently nominated for a record 16 Tony Awards, with Miranda getting a Best Actor nod. If theatergoers want to catch his final performance, be prepared to pay these eye-popping prices. 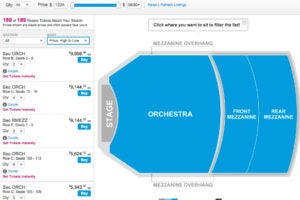 The ”Hamilton“ creator is urging Congress to act on Puerto Rico’s economic crisis, and there’s precedent that says he will succeed