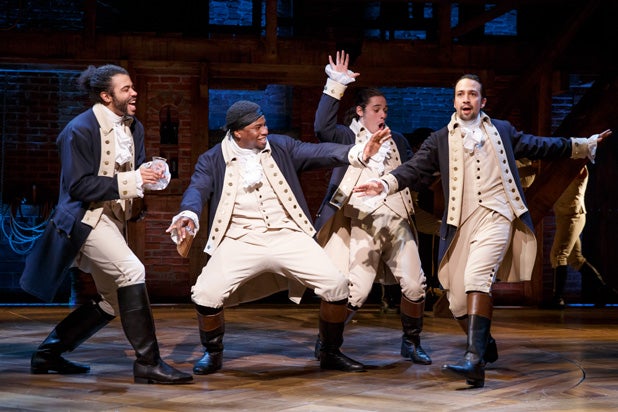 The Founding Fathers have marched west and made “Hamilton” the hottest ticket in Los Angeles.

“Hamilton” was the biggest thing to hit Broadway in ages with its 11 Tony Award wins this past June. But more massive than the list of awards it has won was the price of tickets to see it. Before the announcement of Lin-Manuel Miranda’s final curtain call, tickets were averaging $1,159 each. Tickets for his final performance on July 9, 2016  went for an astronomical $3,391, with the most expensive fetched a whopping $6,580.

Despite the pricey fee, tickets were nearly impossible to get, which made for plenty of late night TV jokes when Donald Trump supporters called for a boycott of the Broadway show in Nov. 2016 after Mike Pence was directly addressed by the cast on stage during their curtain.

The “Hamilton” tour moves to the Pantages Theatre in Hollywood for a five-month engagement starting in August. Good luck getting tickets. If you’re anything like the people below, you’re going to need it.

Getting #HamiltonLA tickets feels like sitting on the 405. I'm not going anywhere. How long does "sit tight" mean?! It's been 48 minutes!

#HamiltonLA I'm suffering here. 4 computers and still waiting. Is meant to be? #sofustrating

Not even Aaron Burr can get tickets to #HamiltonLA

Hey Trump/Pence supporters! Remember when you said to boycott #Hamilton? Please cont to do so. Trying to get #HamiltonLA tix 2day

If you don't get #Hamilton tickets when they go on sale in 5 minutes I got you! For the low low price of $10K you can have mine ????#HamiltonLA pic.twitter.com/nu3rlXfxMI

And, at last, the sweet smell of success!

43 minutes of waiting anxiously then this #HamiltonLA #igottickets Look around at how lucky we are to be alive right now! pic.twitter.com/KzgmNezjcC