With enough color, heart, triumph, and controversy to match any champion boxer’s life story, Panama’s  legendary Roberto Duran certainly deserves a movie that does justice to all his career ups and downs. Unfortunately, the new biopic “Hands of Stone” — named for the thunder-fisted fighter’s mythic sobriquet, and starring Edgar Ramírez as Duran — is too often content to play like a lot of other boxing flicks instead of forging its own path.

It’s slick and watchable enough to where you may never get around to saying “¡No mas!” — the bout-quitting utterance that ended Duran’s 1980 rematch with Sugar Ray Leonard and put a question mark on his legacy — but as writer-director Jonathan Jakubowicz’s movie punches along, you’ll also wish it had offered mucho, mucho mas.

A slum kid with a scrappy gift for fighting, Duran’s will to win in the ring arose, according to the film, out of a desire to avenge his struggling nation over its hotly contested, American-occupied canal zone. (Making matters psychologically thicker, he was born to a U.S. Marine father who abandoned his barrio mom.) It’s an irony lost on the filmmakers, though, that this proud Panamanian’s story is initially narrated by a white American man: Robert De Niro as Duran’s legendary trainer, Ray Arcel. This mentor saw the 20-year-old Duran knock out Benny Huertas at Madison Square Garden in 1971 — the “changed my life” moment for Arcel that opens the film — and decided to teach him the discipline to become a world-class boxer. 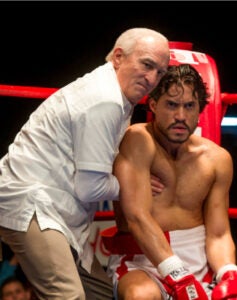 With Arcel in his corner, and backed by wealthy Panamanian Carlos Aleta (Ruben Blades), Duran becomes a strategic force in the ring. He also turns wooing into a power sport, winning over initially wary beauty Felicidad (Ana de Armas, “War Dogs”) like someone who wants the TKO in all aspects of life.

Jakubowicz loves the montage-laden zip of a boxer’s rise, but too much of the movie’s first half feels standard-issue: the swirl of national pride, aggression, and growing success all blending into something generic rather than gripping. (Felicidad, in particular, quickly becomes a biopic accessory rather than one-half of a long, fraught marriage.)

Ramírez (“Carlos”) isn’t necessarily the first person you’d think of to play Duran. The Venezuelan actor’s cagey prettiness seems antithetical to the raw, bulldog masculinity of his hotheaded subject, who always kept a piece of the streets inside him. But Ramírez is too good an actor not to make it work, even if his best moments come late, when the glorified machismo is given a breather and Jakubowicz allows the meaty question of what drives a champion boxer some welcome dramatic space.

This question is explored most deeply in the months between Duran’s 15-round defeat of Sugar Ray Leonard (Usher Raymond) in Montreal and the infamous rematch at the Superdome; the latter bout’s massive payday probably wasn’t in the best interest of the defending champ, who had since replaced the literal and metaphorical fighter’s appetite with a literal one. Finally achieving fame and wealth, Duran could now buy the luxury to stuff himself, and Ramírez gets at the hungry boy still inside the man, scarfing down plates of food to his team’s dismay in a scene that carries a whiff of both humor and consumptive doom.

DeNiro, meanwhile, star of one of the all-time great boxing films (“Raging Bull”), turns in a wholly satisfying late-career performance during a time when many have (appropriately) derided his paycheck-cashing job choices. His loose, soulful take on Arcel as a once-bitten, wise trainer eager to turn Duran into an exemplar of the sport he loves is full of wry, overlapping exchanges and fatherly gestures. (Arcel insisted on combing Duran’s hair between rounds as a way of psyching out his opponent with groomed freshness.) Putting away his great-actor tics and exhibiting some natural, genuine charisma, De Niro shines as he hasn’t in years, even when saddled with crammed-in subplots involving the mob that once owned him (represented by a hushed John Turturro) and a drug-addicted adult daughter.

Also Read: Why Hollywood Is Punch-Drunk on Boxing Movies From 'Southpaw' to 'Hands of Stone'

It’s regrettable that a movie supposedly about Roberto Duran always feels jumbled and lost without De Niro’s Arcel around, despite the fact that Duran fought in four different decades, and well past Arcel’s time with him. Usher’s spirited, high-wattage mini-portrait of Leonard alone is crisp enough to make you want to see a whole movie just about the gamesmanship surrounding the two fighters’ famous matchups.

Even more dispiriting, “Hands of Stone” — whose fight scenes are energetic but sloppily edited and hardly stylish — fumbles the backlash to Duran giving up in the eighth round of that Superdome re-clash. We never get the dramatic autopsy worthy of so intensely debated a moment in boxing, just the express train to redemptive uplift. It leaves the movie feeling like a promising boxer before the training: jumpy, quick to hit, loaded with potential, but too unruly to go the distance.

Muhammad Ali appeared on British talk show host Michael Parkinson's show four times. His first visit was in 1971, where he famously asked "Why is Jesus white?" Ali was one of the first black celebrities to openly debate race.
View In Gallery
x
Looks like you're enjoying reading