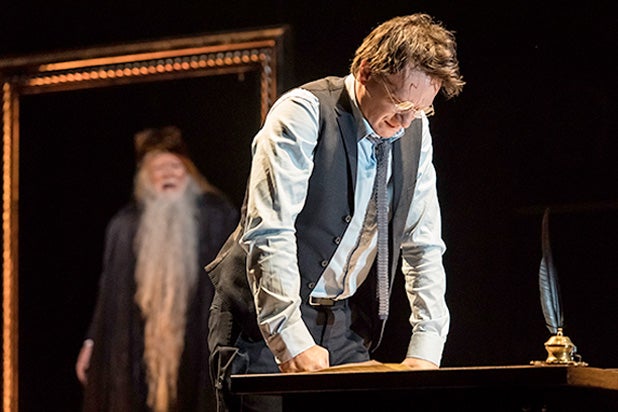 The show will open at the Ambassador Theatre Group’s Lyric Theatre, whose current tenant, Cirque du Soleil’s “Paramour,” will vacate this April to make way for an extensive renovation.

The theater will be scaled down from its current 1,900-seat size to a more intimate playhouse seating 1,500 theatergoers.

The London production has been a massive hit since its July premiere — and multiple theater groups have been vying for the right to bring it to New York.

Directed by John Tiffany and based on an original story by Jack Thorne, the play is set when the seventh film left off as Harry (now 37) and Ginny, accompanied by Ron and Hermione, watch their offspring set off from King’s Cross Station for a new term at Hogwarts.

“We are thrilled about ATG’s ambitious plans which will provide a once in a lifetime opportunity to create a unique theatre space tailored to the specific needs of the production over the play’s two parts,” Friedman and Callender said in a statement.

“The remodeled Lyric will include a smaller auditorium redesigned to the specifications of the ‘Harry Potter and the Cursed Child’ team, as well as an adapted proscenium and stage that can house designer Christine Jones’ glorious set without swamping or compromising director John Tiffany’s brilliant staging. The spacious front of house environment will also be transformed to optimize the atmosphere and audience experience.”

J.K. Rowling added, “I’m delighted we are one step closer in bringing ‘Harry Potter and the Cursed Child’ to Broadway and very excited by the proposed plans.”

Cirque du Soleil is currently in discussions with several theater owners in New York and abroad to find a new home for “Paramour,” which will play its last performance at the Lyric on April 16, 2017, to clear the way for “Harry Potter.” Stage Entertainment has already scheduled a production in Germany in 2018.

“Paramour” has been a solid performer at the Lyric since opening last May, consistently grossing at least $1 million per week.