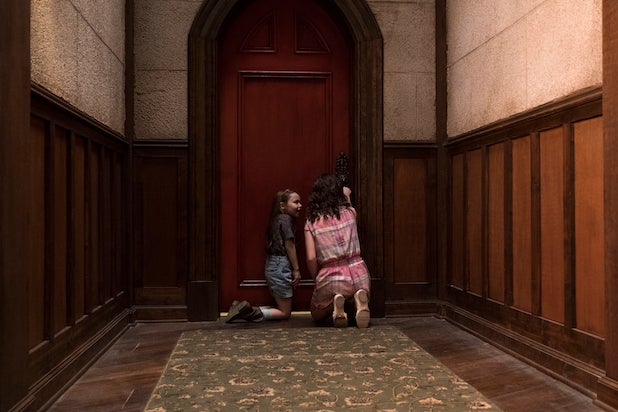 (Warning: This post contains major spoilers for “The Haunting of Hill House”)

Among the complicated central characters on Netflix’s “The Haunting of Hill House,” the so-called Red Room is by far the shadiest.

The mysterious location — described by poor Nellie Crain as the titular home’s “stomach” — spends the better part of the 10-episode series “digesting” the family, by lulling them into a false sense of security within its walls so it can learn their fears and desires and prey on them more easily. But you don’t find that out until the final moments of the finale.

From the outside, the Crains all believe this room with a red door is locked tight and no one can enter it. But come the season closer, it’s revealed every member of the family — except for patriarch Hugh — has been inside the Red Room at one point or another, they just didn’t know it.

The room disguised itself to siblings Steve, Shirley, Theo, Luke, Nellie and their mother Olivia — and “Hill House”s viewers, too — as everything from a treehouse to a dance studio, to get them to come inside.

So how do you hide something that is so central to the story’s mythology in plain sight for an entire season? Mike Flanagan — the creator and director of the streamer’s TV adaptation of the Shirley Jackson novel — tells TheWrap it wasn’t easy, that’s for sure.

“It was a tightrope,” Flanagan said. “We constantly refined the set dressing, so that hopefully people wouldn’t realize they were looking at the same set, but we needed one element to be constant so that once the reveal occurred, a second viewing would feel like it was always obvious. We chose that distinct vertical window. We also made sure to shoot the room from the same angle in all of the episodes leading up to it, so that even the camera framing was familiar. We really just hoped that Hill House was so sprawling, people would assume there were just a lot of rooms they hadn’t seen. What’s odd if they look a little similar?”

While we never saw Hugh inside the Red Room — since he couldn’t get the darn door open — Flanagan thinks that place has “had everyone in its clutches.”

“Those [rooms] are the ones we saw on screen,” he said. “I think there were others… I imagine Hugh having a room of his own, full of tools and other things from his work.”

Read TheWrap‘s full interview with Flanagan below, in which he tells us that he cried over “The Bent-Neck Lady,” just like you did.

TheWrap: The Red Room is one of the show’s biggest secrets that you manage to keep until almost the very end — while still putting it in plain sight in almost every episode. How did you go about showing it to viewers all the time, while still trying to keep them from realizing it was the same room?

Mike Flanagan: It was a tightrope. We constantly refined the set dressing, so that hopefully people wouldn’t realize they were looking at the same set, but we needed one element to be constant so that once the reveal occurred, a second viewing would feel like it was always obvious. We chose that distinct vertical window. We also made sure to shoot the room from the same angle in all of the episodes leading up to it, so that even the camera framing was familiar. We really just hoped that Hill House was so sprawling, people would assume there were just a lot of rooms they hadn’t seen. What’s odd if they look a little similar?

Were there any other forms the Red Room took that Nell didn’t list when revealing its real identity to her siblings? Did we see it at any other point in the show than as Nell’s playroom, Luke’s treehouse, Steven’s game room, Theo’s dance studio, Olivia’s reading room or Shirley’s family room?

Those are the ones we saw on screen. I think there were others… I imagine Hugh having a room of his own, full of tools and other things from his work. I often thought about where the Dudleys go when they’re off screen. They flit through the house in the series, gathering china or paint or boxing things up… but Mrs. Dudley must have spent years going in and out of rooms that weren’t really there. I wonder what they looked like for her. There was only so much that fit in the story we were telling, but I think that room has had everyone in its clutches.

Why did the Red Room never open for Hugh?

Hugh is a man who fixes things. He exerts control over the house, on a physical level. He is in charge of the physical work being done to it, and that gives him a sense of security, comfort and order. To put him in a position where he is incapable of something as simple as opening a door strikes to the very heart of his confidence as a character. Between that and the mold, I think it erodes his sense of competence, and everything else tumbles for him as a result.

Also Read: Here's Everything Coming to and Leaving Netflix in October

Which was your favorite of the specific character-centric episodes and why?

My favorite is probably episode 5. I remember when the idea for Nell’s arc with the “Bent-Neck Lady” occurred to me, I started crying. In a lot of ways, that episode was why I wanted to make this show.

“The Bent-Neck Lady” has become the standout episode of the season with many viewers, thanks to its giant twist and very bittersweet story. Did you mark that episode in your head as a turning point in the narrative? What is your take on why people are so drawn to that episode in particular?

This was the heart of the show, and that’s why it’s nestled right in the center. It completely changes everything that came before it. We make a lot of assumptions about the show and about the ghosts and come from a place of jaded familiarity with the haunted house genre, so this turns that on its head… but more than anything, it’s about what it does to a character that we cannot help but to deeply empathize with. It really was the reason I wanted to make this show, and it slides right into my other favorite episode of the series, which is Episode 6 [“Two Storms”]. Those two episodes together represent the pinnacle of this story for me.

You obviously saw Stephen King’s tweet praising the series. How did that compliment make you feel?

It’s surreal, thrilling, and humbling. I’m honored to be working on adapting one of Steve’s books [“Doctor Sleep”] right now, and I truly hope he feels the same way when he sees it.

Is there a particular moment or reference you included in the show that you haven’t seen pointed out yet that you are waiting for someone to notice and ask you about?

Would you continue the story with a Season 2 or do you think it all really ends here? Or is there any way you’d continue it as an anthology about the house, not the Crains?

If we did do a season 2, it definitely wouldn’t involve the Crains. I think their story is told. An anthology series, about Hill House or something entirely new, could be really interesting!

“The Haunting of Hill House” is available for streaming now on Netflix.