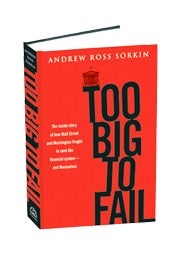 HBO is making a TV movie out of Andrew Ross Sorkin’s buzzy “Too Big to Fail,” the New York Times reporter’s 2009 book about the 2008 financial market meltdown.

The network announced the project on Thursday, but had no casting details or release date.

Peter Gould, writer for AMC’s "Breaking Bad," will pen the adaptation for HBO.

Interestingly, Sorkin’s book wasn’t HBO’s first choice for the movie. According to Reuters, HBO “had hoped to rely on a book about the financial crisis by New York Times journalist Joe Nocera and Vanity Fair writer Bethany McClean, but that book has not yet been published.”