In the era of documentary over-saturation, we need to update Andy Warhol’s saying about those inevitable 15 minutes of fame: In the near future, everyone will have a nonfiction film made about them, especially if they’re public figures. And so here are with “He Named Me Malala,” which chronicles teenage Nobel laureate and girls’ education advocate Malala Yousafzai before and after a Taliban bullet was fired into her head on a school bus when she was 15.

After becoming the youngest-ever winner of the Nobel Peace Prize, the Pakistani Yousafzai, who moved to the U.K. with her family after the shooting, has continued to serve as a role model and a brand-name activist around the world.

Made in conjunction with The Malala Fund, the nonprofit organization that bears her name, the latest film from director Davis Guggenheim (“An Inconvenient Truth,” “Waiting for Superman”) burnishes the donation-friendly image of Yousafzai as a passionate, well-spoken, colorfully head-scarfed girl who just wants to help make the world a better place.

Grace and poise are certainly embedded in Yousafzai’s DNA, but there’s frustratingly little of her vulnerability or interiority in the film. Guggenheim followed Yousafzai for 18 months, but an aborted interview — during which Yousafzai draws into herself and nervously declines to speak when asked about her physical and emotional pain — perhaps best represents the relationship between filmmaker and subject. The slick, shallow result is a movie better suited for schools than the cineplex: The Malala who lets herself be captured here is to be admired and applauded, not identified with.

Even the most basic facts about the Yousafzais’ existence — their income, their constant moves from house to house, the invisible apparatus that organizes Malala’s high-profile events abroad and also taught the giggly teen to be a red-carpet pro — remain a mystery.

Never addressed is the film’s central paradox: that Yousafzai is sacrificing her own grades for the sake of girls’ education. The documentary also feels scrubbed free of any controversial or even tangential topics lest they distract the focus from the urgency of children’s global welfare.

And yet “He Named Me Malala” is an absorbingly emotional experience because of Malala and her father Ziauddin’s remarkable heroism, as well as Guggenheim’s passionate retelling of it using storybook animated scenes and white-lit slo-mo recreations. 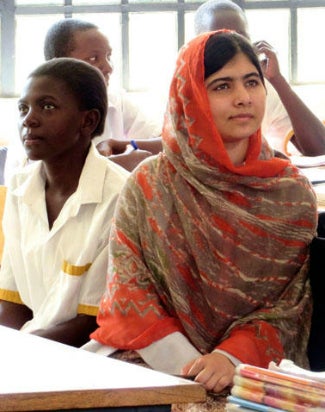 “I’m still an ordinary girl. But if I had an ordinary father and an ordinary mother, then I’d have two children now,” says the 18-year-old of her journey. Indeed, the film becomes most compelling when it transitions in the third act to the idealistic Ziauddin, a schoolteacher who overcame a stutter to speak out against the Taliban. (Frustratingly but understandably, Malala’s more traditional, camera-shy mother barely figures in the doc.)

When Malala volunteered to pen the viewpoint-of-an-ordinary-girl blog for the BBC that first earned her notoriety, Ziauddin made the fateful decision that would eventually end in an attempted assassination of his only daughter.

It’s a parenting choice he questions still — and quite likely the only expression of doubt in the film, which is what makes his story so engrossingly human. And it’s a rousing example of male, or at least fatherly, feminism, a source of support all too crucial in the fight for girls’ and women’s equality.