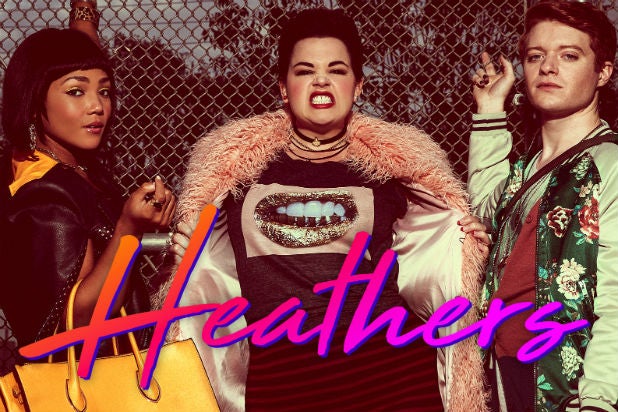 The first look at the Paramount Network’s remake of “Heathers” is finally here, though we have to wait until 2018 to watch the 10-episode anthology series.

“The killer cult classic is back,” the footage promises. The teaser for the dark comedy of the original film ends with the body of what appears to be a teen dropping from above and landing right in front of a group of perplexed football players with a thud.

Playing off the plot of the 1988 cult hit movie starring Winona Ryder and Christian Slater, the TV series has a twist: The cool kids are the group that would have been the outcasts in a different era. A gender-queer male (Brendan Scannell), a black lesbian (Jasmine Mathews) and an overweight girl (Melanie Field) rule Westerburg High School.

The new footage features Grace Victoria Cox (Under the Dome) as Ryder’s Veronica, who reprises a classic profane line involving a chainsaw. James Scully will play Slater’s J.D. Stars from the original movie Selma Blair and Shannon Doherty are expected to make cameos on the show.

“Heathers” was ordered to series on TV Land in January but moved to Paramount Network (formerly Spike TV).

Watch the teaser below. But be warned, there’s that aforementioned explative.

Coming in 2018 to the Paramount Network. #Heathers #☠️