UPDATE, July 30: Herman Cain died from complications of COVID-19 after being hospitalized for nearly a month. Read more here.

ORIGINAL POST, July 2: Former Republican presidential candidate Herman Cain announced Thursday that he has been hospitalized due to symptoms of COVID-19. But in an unusually on-the-nose development, the announcement came only hours after he denounced measures to stem the spread of the illness on Twitter in a show of political support for Donald Trump.

Early Thursday afternoon, Cain’s representatives said in a statement, posted on Cain’s Twitter account, that he was informed June 29 that he tested positive for the coronavirus that causes COVID-19, and that by Wednesday his symptoms were severe enough that he “required hospitalization.” According to the statement, Cain was taken to an Atlanta-area facility Wednesday night, and while his symptoms are “serious,” he “did not require a respirator.”

Left out of Cain’s statement is a notable event that took place between his diagnosis on Monday and his hospitalization Wednesday night. On Wednesday afternoon, Cain tweeted a link to a Western Journal article about South Dakota Gov. Kristi Noem, who bragged that social distancing will not be required at a July 4th Trump rally at Mt. Rushmore. In his tweet, Cain added: “Masks will not be mandatory for the event, which will be attended by President Trump. PEOPLE ARE FED UP!”

Also Read: Trump Says He Would Wear a Mask Around a Large Group of People -- Though He Hasn't (Video)

Cain’s reps said in the statement that “there is no way of knowing” where Cain was infected with the coronavirus. While that may indeed be true, it’s possible to piece together a potential timeline. COVID-19 has an incubation period of anywhere between 2 and 14 days. And nine days before Cain was diagnosed, he attended Trump’s under-attended political rally in Tulsa, Oklahoma.

That event — notable for requiring attendees to sign a waiver promising they won’t sue if they contract coronavirus — has been associated with multiple coronavirus infections among people surrounding Trump. Several advance staffers tested positive on the day of the event, with more testing positive after, including two secret service agents. And dozens of agents present at the rally were subsequently ordered to self-quarantine due to possible exposure.

Cain, who survived a stage IV cancer diagnosis in 2006, tweeted a photo from inside the venue, where he didn’t wear a mask or practice social distancing. Here’s what that looked like:

By this weekend, 130,000 people in the United States will have died from COVID-19. So for anyone “FED UP” with wearing a mask or simply not wearing one to begin with, cases are still rising, and health officials are urging everyone to wear masks. You may not just save someone else’s life; you could save your own.

See Cain’s tweet denouncing masks, and the announcement less than a day later that he’d been hospitalized, below.

Update: Three days before his death, his anti-mask tweet was deleted. We have added a screenshot. 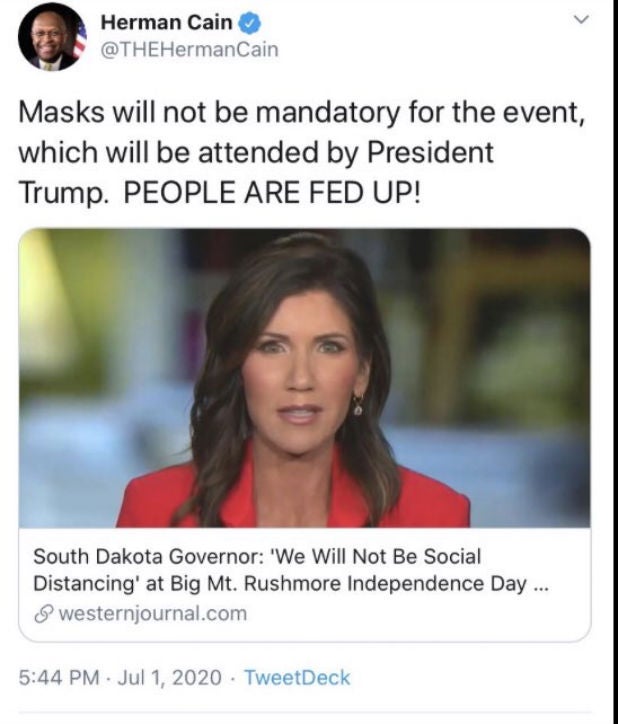 We are sorry to announce that Herman Cain has tested positive for COVID-19, and is currently receiving treatment in an Atlanta-area hospital.

Please keep him, and all who are battling this virus, in your prayers.

Our full statement appears below. Updates to follow. pic.twitter.com/lDRW7Rla4e