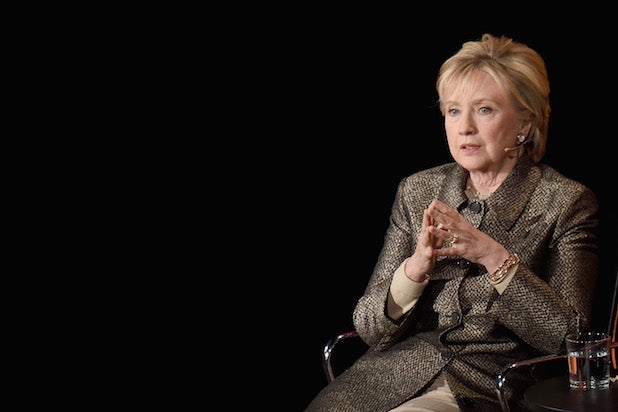 Hillary Clinton is not letting Donald Trump off the hook for his bizarre late-night tweet anytime soon.

Her sarcastic comment was in reply to President Trump saying earlier in the day on the social media site that, “Crooked Hillary Clinton now blames everybody but herself, refuses to say she was a terrible candidate. Hits Facebook & even Dems & DNC.”

Also Read: Hillary Clinton: 'Covfefe' Was a 'Hidden Message' to the Russians

Of course, the whole world now knows that Clinton’s jab was referencing Trump’s nonsensical tweet Tuesday night in which he seemed to fall asleep at the keyboard after writing, “despite the constant negative press covfefe.”

The message sparked a social media firestorm and left people scratching their heads, making up memes and generally just thinking “WTF?” Even worse, the flub remained on Trump’s Twitter feed for six hours before being deleted.

Earlier on Wednesday while speaking at the Code Conference in Los Angeles, Hillary Clinton joked about the mystery tweet, saying, “I thought it was a hidden message to the Russians.”

The 2016 Democratic presidential nominee also shared her thoughts on Russian hacking, her campaign, and social media’s roll in fake news, check out the link below — all of which led to Trump’s latest attack on “Crooked Hillary.”

Oh, the drama is never ending.