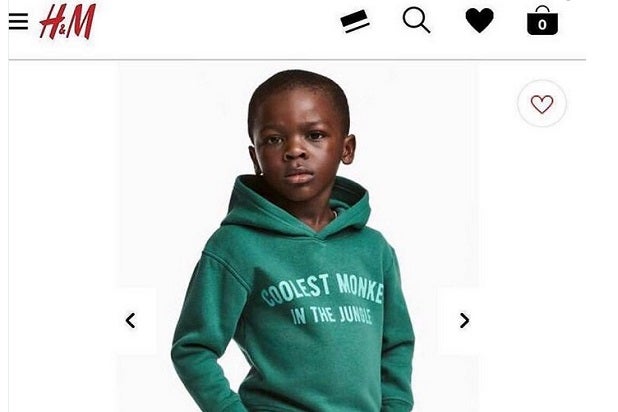 Clothing store H&M has issued an apology, after stirring outrage with an ad featuring a black child wearing a hooded sweatshirt bearing the motto “Coolest Monkey in the Jungle.”

In a statement to TheWrap on Monday, H&M said that it had removed the image and pulled the garment from sale.

H&M also said that it will “thoroughly investigate” how the ad came about.

“We understand that many people are upset about the image. We, who work at H&M, can only agree. We are deeply sorry that the picture was taken, and we also regret the actual print,” H&M said. “Therefore, we have not only removed the image from our channels, but also the garment from our product offering globally.”

The company continued, “It is obvious that our routines have not been followed properly. This is without any doubt. We will thoroughly investigate why this happened to prevent this type of mistake from happening again.”

The image drew wrath on Twitter, including from the group Models of Diversity, which tweeted Monday, “And then H&M UK got the bright idea to feature a black boy model with ‘Coolest Monkey in the Jungle’ hoodie on its website. How on earth can this be? SHAME ON YOU !”

New York Times columnist Charles M. Blow was equally blunt in his assessment of the image, tweeting Sunday, “@hm, have you lost your damned minds?!?!?!”

@hm And then H&M UK got the bright idea to feature a black boy model with ‘Coolest Monkey in the Jungle’ hoodie on its website. How on earth can this be?
SHAME ON YOU ! pic.twitter.com/3FaKCqviLQ

. @hm, have you lost your damned minds?!?!?! pic.twitter.com/EYuCXLZtv3

So not a single person at @hm knew the history of “monkey” and its derogatory use as it relates black people before they put up this ad…? https://t.co/hQfwXPgl1n

In the year 2018 there’s no way brands/art directors can be this negligent and lack awareness. If look at other sweaters in same category they have white kids. We have to do better. pic.twitter.com/Av4bS4t6yn

How I’m pulling up to H&M to return all of their racist ass clothes pic.twitter.com/Ftw4H7nGeL

Me ordering off of H&M once the “We’re sorry for the racist ad” sale starts pic.twitter.com/G0kpLuyODk

So the white kid is the “survival expert” and the black kid’s “the coolest monkey in the jungle” yeah?! 2018 and we still have to bear this kind of non-sense, injustice & disrespect?! @hm please get yourself a reasonable, intelligent marketing manager ASAP!! ????????‍♂ #smh pic.twitter.com/HrzuIDhT5W

I don’t think that H&M ad was intentionally racist but I do think it was very careless.

Every company should invest in training that encompasses cultural competency and sensitivity. It is absolutely necessary. @hm pic.twitter.com/efMR0oL3jx