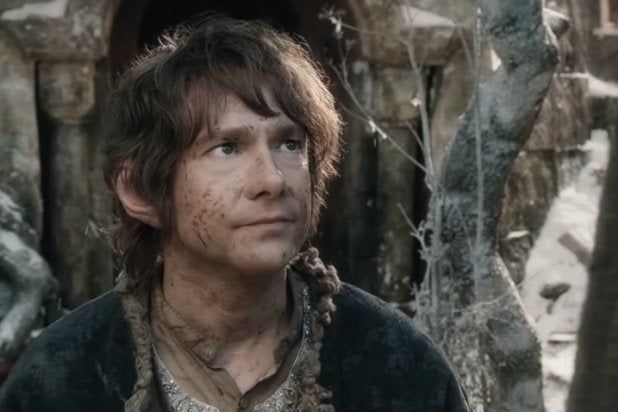 “The Hobbit: The Battle of the Five Armies” crossed the $600 million mark at the overseas box office, led by a record $49.5 million debut in China this weekend.

That’s the highest non-holiday three-day opening for any movie there, distributor Warner Bros. said Sunday, and it pushed the foreign total for the finale of Peter Jackson’s blockbuster franchise to $619 million. It also helped the Middle Earth epic to easily become the weekend’s No. 1 movie internationally, with a total of $54.2 million from 62 markets.

After ringing up a $249 million domestic haul, “Battle of the Five Armies” is now at $866 million globally and has a good shot $1 billion in worldwide grosses.

With the massive opening, China became the third highest-grossing foreign market for “Five Armies,” behind only Germany with $78 million and the U.K. with $63 million.

The No. 2 film overseas was Fox’s Liam Neeson thriller “Taken 3,” after the franchise finale tracked down $26.3 million from 57 markets. It opened in the top spot in France with $8.2 million. That tied with “Taken 2” for Neeson’s best opening there.

Also Watch: Felicity Jones Brings the Heart to ‘Theory of Everything’ (Exclusive Video)

“The Theory of Everything,” the Best Picture Oscar-nominated historical drama starring Benedict Cumberbatch, took in $7 million from 25 markets for Universal. That upped its foreign total to $41.7 million.

Universal’s fantasy adventure film “The Seventh Son” is up to $77 million from abroad, after bringing in $6.8 million from 46 markets. It opens nationwide in the United States on Feb. 6.