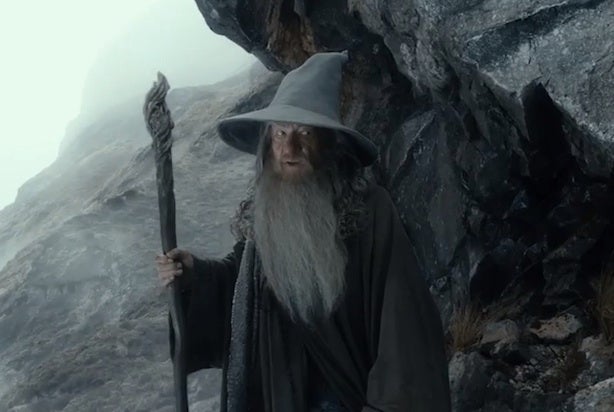 Smaug has a message for hobbit, dwarfs and wizards looking for a piece of his treasure in an action-packed new trailer for “The Hobbit: The Desolation of Smaug.”

“I am king under the mountain,” the scaly and hitherto unseen dragon at the center of Peter Jackson’s fantasy trilogy, says in the dulcet tones of Benedict Cumberbatch.

To hammer home his point, he lets out a great billow of fire.

Also read: Peter Jackson Wants to Do Smaller Movies After ‘The Hobbit’

That’s the capper to an extended look at the upcoming sequel to the 2012 film adaptation of J.R.R. Tolkien’s novel, which made nearly as much loot as the gold and jewels Smaug sits on, but left some fans griping that it was long on running time and light on plot.

The latest preview offers up the return of Legolas (Orlando Bloom), lots of Orcs, and Ian McKellen and Sylvester McCoy as a pair of pontificating wizards.

“The world is in grave danger,” McCoy says at one point, after McKellen worries about his merry troop of treasure-hunters.

Just how grave a threat will become clear on Dec. 13, 2012 when “The Hobbit: The Desolation of Smaug” hits theaters.