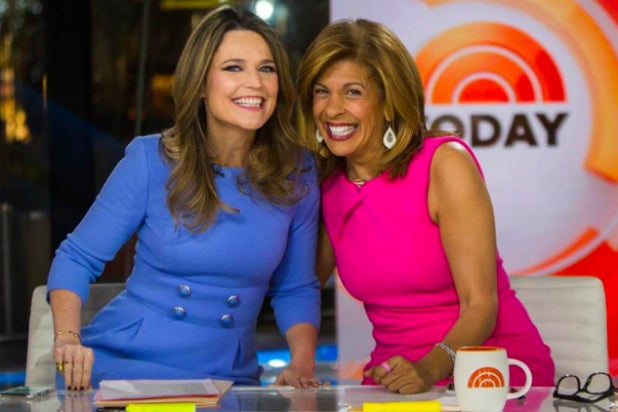 Hoda Kotb has officially replaced Matt Lauer as co-anchor of the “Today” show, and Twitter users are celebrating her pairing with Savannah Guthrie this morning.

“G.I.R.L.s are taking over!” the Girl Scouts tweeted of the new all-female setup at the NBC News program.

“#girlpower at the #TodayShow news anchor desk!” another user of the popular social media platform wrote. Second billing for that one as she (presumably) does not manufacture Thin Mints.

There was plenty more optimism where that came from. See a sample below.

I told my mom back when #Lauer got fired that, if they were smart, @TODAYshow would go with two women. Hoping that @hodakotb shines now that she’s in the right venue and kicks some ass. #SavannahHodaTODAY

Now, only if they can get @Oprah to replace Charlie Rose on @CBSThisMorning, we'll have an ALL women panel behind the newsdesk on TWO major Network morning shows!#SavannahHodaTODAY

I’m happy for her too! #girlpower at the #TodayShow news anchor desk! And I’m glad you two will still be on the fourth hour! Congrats to Hoda and happy New Year! #SavannahHodaTODAY

Great choice Today!! Congrats to @TODAYshow for their AWESOME choice of @hodakotb as co-anchor! And not because she's a woman and this is a first, but just because it was the right choice and she earned it thru hard work. #SavannahHodaTODAY #BeProudHalleyJoy

Not gonna lie, I shed a tear or two. So happy for @hodakotb and @SavannahGuthrie and for all the little girls who get to see two smart and decent women at the desk every morning. #SavannahHodaTODAY

#SavannahHodaTODAY Congrats Ms. Kotb! Now if only we can get more diverse people hosting stuff on t.v. We need more LGBT hosts, 2 males hosts to balance things (not just espn), and more people of color.

Of course, not everyone was as happy as those people. Here are the thoughts from probably a new “Good Morning America” viewer:

NBC obviously to scared to hire another man for the Today Show and a blatant attack on men. I will watch another channel #savannahhodatoday