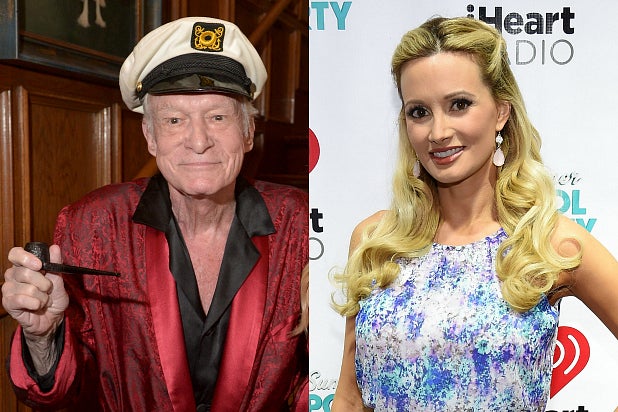 Holly Madison has a bone to pick with Edgeline Performance, and she wants the erection-pill company to pay.

“The Girls Next Door” alum Madison has filed a lawsuit against Edgeline Performance, claiming that it’s been spreading total lies about her and Hugh Hefner’s sex life to shill its “natural testosterone enhancement” pills Blackcore Edge.

According to the suit, filed in Los Angeles Superior Court on Thursday, Madison first became aware of the alleged wrongdoing in December, when she discovered “an alleged Men’s Health article” referencing an interview that Madison had done with Dr. Oz on “Today.”

There are only  a couple of problems with that, the lawsuit contends: Madison was never interviewed by Dr. Oz on “Today,” and the website it was published on isn’t actually affiliated with Men’s Health.

Oh, and the article is also a pack of lies. Allegedly, according to the suit.

“[T]he article summarizes alleged comments by Plaintiff, which she never made. Specifically, the article states that Plaintiff claimed that Hugh Hefner regularly took Blackcore Edge to cure his erectile dysfunction and that when Hefner took a pill, 15 minutes later his blood would start pumping. He got stronger, bigger and  lasted as long as an 18-year-old,” the lawsuit reads. “Every statement and comment allegedly attributed to Plaintiff in the article is false.”

The suit also says that the “article” contained the statement, “Hugh and Holly Recommend Taking Blackcore Edge 15 Minutes Before Intercourse for Maximum Results!” — also a lie, according to Madison.