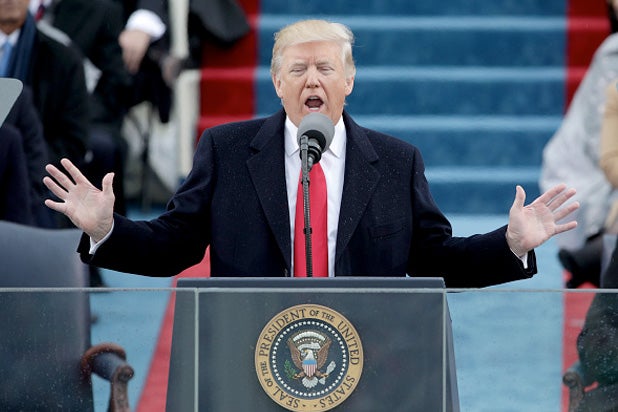 Donald Trump is now the 45th President of the United States — and celebs have plenty to say about it.

After being sworn in by Chief Justice John Roberts, President Trump took the podium at the Capitol Building in front of hundreds of thousands of attendees at the Washington Mall — and with thousands of others protesting in the streets beyond — and delivered a speech that largely aimed at the voters who pushed him to the White House. Trump promised to return control of America’s democracy to the people from special interests.

“That all changes — starting right here, and right now, because this moment is your moment: it belongs to you.”

But Trump’s promise didn’t impress many Hollywood figures and Trump detractors, who scorned the new president and compared Trump’s promise to the Batman villain Bane in “The Dark Knight Rises,” who vowed to take Gotham City from “the corrupt! The rich! The oppressors of generations who have kept you down with myths of opportunity…and we give it to you, the people.”

Once or twice in every generation a line is crossed so egregiously that where you stood on the issue will forever define you. -Kara Vallow

I agree with everything he’s saying and nothing he’s doing. One nation under Goldman Sachs.

Stop telling me to “get over it”. Get UNDER it. He works for US. The democratic process is constant. Stay informed, stay engaged, speak up.

This is what professional event organizers would call a poor turnout pic.twitter.com/Lw43nmqW3E

I’m trying to be a respectful diligent American rt now but as I start to watch this inauguration- Regression is the word that comes to mind.

Many celebs were so put off by Trump that they have refused to even watch the inauguration at all, with some encouraging their followers to find something else to do.

Um, wanna hear my first sketch of The Story Of Tonight? https://t.co/IaFjfyq4r0

I’m boycotting my TV not even watching for the inauguration for the 1st time in my life! https://t.co/pc64Tsb6lJ

Oh wow! “The King and the Chorus Girl” is on @tcm right now! Super-underrated flick. Joan Blondell is amazing!

But when they weren’t trying to provide distractions, celebs encouraged their followers, many of whom share their left-wing sentiments, to stay vigilant in opposition to Trump and promoted tomorrow’s Women’s March. Messages of gratitude were also sent to Barack Obama and Hillary Clinton, both of whom attended the inauguration.

On the @lennyletter bus! A woman just asked if we were relatives. No, we are riot grrrls (both start with R, I get the confusion) pic.twitter.com/XnJbFse0qp

i was going to go to sundance to support john tomorrow but feeling compelled to support my fellow women. see you at the women’s march, DC

Maturity, grace and oh boy, is she going high when they went low. https://t.co/kyqsVPlb22

Use Your Voice. Watch this. Share this. #wearehere #lovearmy https://t.co/5jONBjQmut