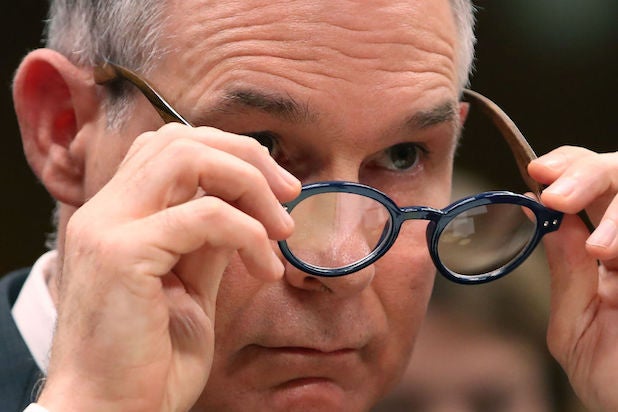 Arnold Schwarzenegger, along with Vermont senator Bernie Sanders, called Pruitt the “worst EPA administrator” the country has ever had. “It’s about time time,” tweeted the “Terminator” star, adding, “He will go down in history books the worst EPA Administrator we’ve ever had.”

“Trump finally told Pruitt to put the lotion in the basket,” wrote comedian Kathy Griffin, referencing Pruitt asking his security detail to pick up personal items such as his dry-cleaning and lotion. “Star Wars” actor Mark Hamill also criticized Pruitt’s personal expenses, sarcastically saying he did an “outstanding job” as the head of the EPA.

And while they didn’t name Pruitt outright, actor Mike Birbiglia mocked Trump’s initial decision to hire him and Patricia Arquette said “The Earth just breathed a sigh of relief.”

Trump finally told Pruitt to put the lotion in the basket https://t.co/5gwHBVl3Od

It's about time time. He will go down in history books the worst EPA Administrator we've ever had. https://t.co/jnyazIbtyo

#ScottPruitt Now that you have single handily guided the Environmental Protection Agency towards destroying the Environment, I’m curious what your encore will be. Perhaps you can take over a library where they just burn books.

“Imagine being too corrupt for the Trump administration.” Bye, Scott. https://t.co/trfbBqK05x

Scott Pruitt is why @MarkBurnettTV owes America #ApprenticeTapes @MGMTelevision One 12 hr Trump Tower Board Room Shoot. We deserve to see the man you created behind your curtain Mark Burnett. You make hundreds of millions @NBCTheVoice @ABCSharkTank @survivorcbs THE WORLD SUFFERS.

The second most corrupt person in Trump’s administration just resigned. Now let’s get the biggest Swamp Thing outta there.

Scott Pruitt allegedly asked aides to buy a used hotel mattress and track down specific moisturizing lotion. Can we make a general rule that nobody can serve in the government if they can’t figure out Amazon Prime?

Can we demand that Scott Pruitt pay us back? Asking for a nation of ripped-off taxpayers.

They have replaced him with someone hideous

Scott Pruitt was the worst EPA administrator in the history of the agency. Not only has he acted, time and time again, in an unethical manner, but he has led the agency in exactly the wrong direction. https://t.co/iRUR6sST5e

he only hires the best people.

Pruitt’s resignation comes at just after a swath of ethical gaffes on his part surfaced, such as demoting staff members who questioned him, requesting expensive travel, and ordering official EPA employees to complete personal errands.

In terms of environmental actions, Pruitt led the charge in urging President Trump to withdraw the United States from the 2015 Paris Climate Agreement and has supported the fossil fuel industry.

I have accepted the resignation of Scott Pruitt as the Administrator of the Environmental Protection Agency. Within the Agency Scott has done an outstanding job, and I will always be thankful to him for this. The Senate confirmed Deputy at EPA, Andrew Wheeler, will…