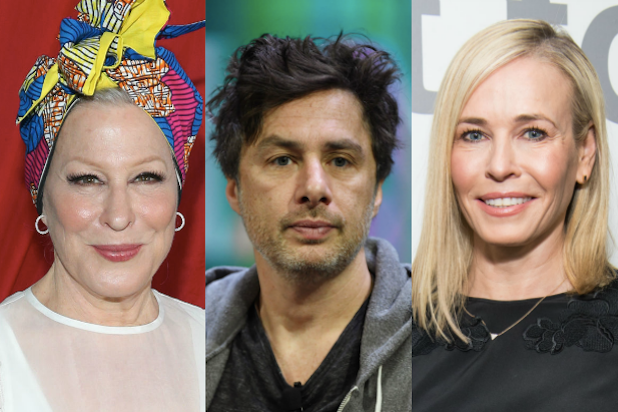 President Trump’s joint press conference with Vladimir Putin on Monday didn’t exactly get the reaction Trump probably hoped for. Unless what he wanted was for a trending topic to be the word “treason.”

During the presser, held at the start of a US-Russia summit in Helsinki, Trump, among other things, called for an end of the investigation into Russian interference in the 2016 election. He suggested that U.S.-Russia tensions were caused by the U.S., and even kicked around the idea of the two countries working together on cyber security. He said this all while standing next to Putin.

By the time the conference ended, the hashtag “#TreasonSummit” was a trending topic as a wide cross section of Americans blanched at Trump’s display of comradeship with the Russian leader, including both Democratic and Republican members of congress. Joining the condemnation of the event were celebrities including Jefferey Wright, Josh Gad, John Cusack, Ellen Barkin, Judd Apatow, Bette Midler, Rob Reiner, Roseanna Arquette and more.

“Kim Jong-un, please come through those doors, join @realDonaldTrump & Putin on this #TreasonSummit stage and take this song & dance show over the top,” Wright, a star on HBO’s “Westworld,” tweeted.

Also Read: New York Times Slammed for 'Homophobic' Trump-Putin Video Cartoon: 'This Is Beneath Us'

“Frozen” star Josh Gad wrote: “Right now, a KGB trained operative who’s been President of Russia for close to 20 years and who every intelligence angency [sic] said undermined our election is alone in a room with the Host of Celebrity Apprentice. What could possibly go wrong?”

Reporters and TV anchors also slammed the presser. “You have been watching perhaps one of the most disgraceful performances by an American president at a summit in front of a Russian leader truly that I’ve ever seen,” CNN’s Anderson Cooper said.

And MSNBC’s Joy Reid tweeted: “Donald Trump was just asked directly if he would denounce Russia’s attack on our election ‘with the whole world watching’ and he refused. He pivoted to attacking Clinton, demanding to know where her server went, and said he doesn’t know why Russia would attack our election.”

Right now, a KGB trained operative who’s been President of Russia for close to 20 years and who every intelligence angency said undermined our election is alone in a room with the Host of Celebrity Apprentence. What could possibly go wrong?

Treason is trending.
The president sided with Putin over the USA.

Those two facts – anyone care to dispute ? https://t.co/paDJlI9Iei

We don’t have to imagine anything. no new news here https://t.co/Ty67JGl6c0

The idiots are out in droves today… https://t.co/GbkG1pIIl0

Tomorrow, @realDonaldTrump is meeting with Putin—who attacked our democracy and 2016 election. Yet Trump is backing out of meeting w/ Mueller, who is investigating the conspiracy. Watch my video w/ @MoveOn & sign my petition demanding Trump #MeetMueller! https://t.co/oIvXhdeCXC https://t.co/omgrFks3mM

The DOJ indicts 12 Russians for interference in the 2016 elections, and Trump meets Putin and blames the US for tensions. An outright traitor who disparages his own country. What good is he to us??

He didn’t believe it could happen, and it did happen. He did not stop them, so by taking no action whatsoever, you are carrying on the legacy of your favorite president, Barack Obama. While you’re blowing your boyfriend Putin at your summit, know that evil villains fall hardest. https://t.co/KwEzu5lohr

Retweeted Nancy Levine ???? (@nancylevine):@pacelattin "Trump has now gone completely off the rails, to the point where many are accusing him of being a traitor and committing treason. Many Republicans will not… https://t.co/RRlHfYcc5E

I don’t want to be Russian.

This was just tweeed by The Official Twitter account of the Ministry of Foreign Affairs of Russia.

The point it’s confirmed: ur Pres is moonlighting as Putin’s spokesperson. https://t.co/r8d7kod1nv

Kim Jong-un, please come through those doors, join @realDonaldTrump & Putin on this #TreasonSummit stage and take this song & dance show over the top.

Unless one of the translators talks, we'll never know what went on in that Helsinki meeting. Putin's a liar and Trump's another. They are both showmen, and this is made-for-TV entertainment.

Whatching Trump denigrate our FBI 's report on Russian collusion to get him elected as he praised Putin, started my shaking in disbelief which now, many minutes later, is stilll shaking.

Trump is taking the word of a lying dictator over the word of US Intelligence only after placing blame on the US for its poor relationship with Russia. Trump is Putin’s puppet. https://t.co/LVkxIw5mHS

Donald Trump’s press conference performance in Helsinki rises to & exceeds the threshold of “high crimes & misdemeanors.” It was nothing short of treasonous. Not only were Trump’s comments imbecilic, he is wholly in the pocket of Putin. Republican Patriots: Where are you???

Once again, @realDonaldTrump takes to the international stage to embarrass America, undermine our institutions, weaken our alliances, & embrace a dictator. Russia interfered in our elections & attacked our democracy. Putin must be held accountable – not rewarded. Disgraceful.

Donald Trump was just asked directly if he would denounce Russia’s attack on our election “with the whole world watching” and he refused. He pivoted to attacking Clinton, demanding to know where her server went, and said he doesn’t know why Russia would attack our election.

We just witnessed the President of the United States abdicate his national security responsibilities as Commander-in-Chief. When he was given the chance to hold Putin accountable and condemn Russia's interference in our elections, he refused.

I never thought I would see the day when our American President would stand on the stage with the Russian President and place blame on the United States for Russian aggression. This is shameful.

Every single day, I find myself asking: what do the Russians have on @realDonaldTrump personally, financially, & politically? The answer to that question is that only thing that explains his behavior & his refusal to stand up to Putin. #ABetterDeal

Just so we're clear: Trump has attacked Canada for tariffs on diary products, but refuses to hold Putin accountable for interfering in our election.

Here's the video. Trump, asked whether he believes in his own U.S. Intelligence Community or Putin on Russian hacking, Trump responds: "I don't see any reason why it would be [Russia.]" (via ABC) pic.twitter.com/sKLSeVaqlS

Hillary Clinton had far more celebrity supporters than Donald Trump, but his 37 celebrity fans turned out to be the ones who backed the winning candidate. Here are Trump's celebrity fans.