DACA, an abbreviation for Deferred Action for Childhood Arrivals, protects young people Obama dubbed Dreamers, who were brought to the U.S. by their parents when they were young and who know no other country as their home. McClatchy reports that Trump will likely let them stay in the U.S. only until their work permits run out.

“One million young immigrant #Dreamers will be at risk of deportation if #DACA is ended,” tweeted Rhimes. “One Million. We must #DefendDACA #HereToStay.”

People. One million young immigrant #DREAMers will be at risk of deportation if #DACA is ended. One MILLION. We must #DefendDACA #HereToStay

Apatow — an increasingly vocal critic of the president on Twitter — retweeted a “Rock the Vote” explainer on DACA and its importance.

There's a lot of talk about #DACA and how it'll be affected under this administration.

YouTuber Tyler Oakley chimed in as well, echoing Rhimes as he tweeted “we MUST protect them.”

if @realdonaldtrump ends #DACA, 800k young immigrant #DREAMers will be at risk of deportation. we MUST protect them. #DefendDACA

“Scandal” star Kerry Washington hit the RT button on a NowThis video, with California Senator Kamala Harris calling for President Trump to “do the right thing” and protect Dreamers. 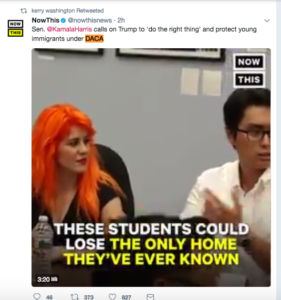 Actor Mark Ruffalo has vocally been pushing back against ending DACA, even marching today to support keeping the program alive.

Comedian Josh Gad wondered why Trump would worry about deportations rather than on Hurricane Harvey. “As millions of people are picking up the pieces of a historic storm, Trump’s focus is to go after #DACA & 800,000 people #DefendDACA,” he tweeted.

Emmy and Grammy winning composer Lin-Manuel Miranda has also been retweeting his support for DACA as well. 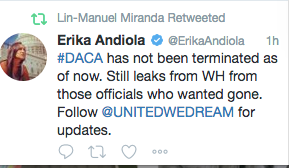 Trump supporter James Woods went in the other direction, sharing a Breitbart article on 700,000 jobs that will be lost if DACA ends. His response? A sarcastic “Oops!”