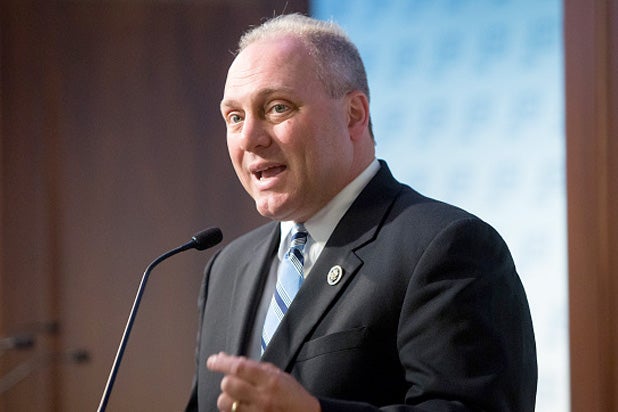 Hollywood was quick to react to Wednesday morning’s shooting in Alexandria, Virginia, where a gunman opened fire with a rifle on a group of Republican politicians practicing for the upcoming Congressional baseball game. House Majority Whip Steve Scalise was struck, along with several others.

Julianne Moore said she was “saddened by this shooting in our US Capitol,” in a tweet, but also urged Congress “to act.” She shared a tweet from The Atlantic senior editor David Frum, that called out Virginia for its lack of background checks on gun owners.

Film producer Megan Ellison called the shooting “a frightening encapsulation of the fragility or our deeply divided country.”

Alyssa Milano retweeted a tweet from Stand Up Republic co-founder Mindy Minn, who said, “An attack on one American is an attack on all Americans.”

President Donald Trump offered his prayers for Scalise in a tweet shortly following the incident. “Rep. Steve Scalise of Louisiana, a true friend and patriot, was badly injured but will fully recover,” Trump tweeted. “Our thoughts and prayers are with him.”

Scalise is in stable condition with a “hip wound” at George Washington University Hospital, according to the Associated Press. House Speaker Paul Ryan’s spokesperson said Scalise’s wounds were not believed to be life-threatening.

Police said a suspect in the shooting was in custody.

Rep. Mo Brooks witnessed that attack and told the AP that several other people also were hit, including two law enforcement officers. Brooks also told CNN that at least 50 rounds were fired.

See some of Hollywood’s reactions below:

I am saddened by this shooting in our US Capitol. Please #Congress, what will it take for you to act?#gunsafety @Everytown @MomsDemand https://t.co/06kE35zgeT

This shooting is such a frightening encapsulation of the fragility of our deeply divided country. I pray for leadership & to see some light.

The shooting in Alexandria this AM was a senseless horrific act. My thoughts are with Rep. Scalise, the Capitol Police & all those impacted.

Prayers and thoughts in Alexandria, with Steve Scalise and his family, and all affected. Horrible.

An attack on one American is an attack on all Americans. May we resolve to treat each other with love and respect.

Rep. Steve Scalise of Louisiana, a true friend and patriot, was badly injured but will fully recover. Our thoughts and prayers are with him.

Too many stupid asses in our country with too many fucking guns.

God what is happening in this country? https://t.co/4wU8N2Y9zH

My God. This is horrible. Sending thoughts and prayers to all involved. https://t.co/0ENjZ53kcT

#SMH. Over a 100 yrs of bipartisan tradition stained now by senseless act-Prayers to 4 victims-Will USA ever take #EndGunViolence seriously? https://t.co/Q7Yzd7vP4q

Sending healing wishes to Congressman Scalise and the four people shot today in Alexandria, VA. They were… https://t.co/hNwBeVY4q2