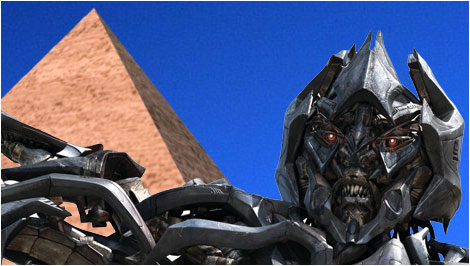 A major milestone quietly passed last weekend: the first major Hollywood film in decades filmed in the heart of the Middle East. “Transformers II” turned its cameras at the Pyramids in Egypt, and again in the upper Egyptian town of Luxor, near the famed Valley of the Kings. This is significant for many reasons but mainly because it represents a rare move by two Hollywood studios, Paramount and DreamWorks, to connect to a country and culture that is perceived to be hostile the United States.

I say ‘perceived’ because my guess is you’d probably find no more avid fans elsewhere in the world than those clustered around Shia LeBeouf, the star of the film, in this part of the world. But after years of anti-American images in the Middle East, and years of entrenched mistrust, this is the kind of interaction – and publicity – that makes a difference. I hear from sources within the studio that DreamWorks was “petrified” when producers got clearance to shoot at the pyramids and in Luxor, and that LeBeouf was hesitant but decided to take the leap. (I agreed to hold this news until production had been safely completed.)

Hesitation is certainly comprehensible. Even before 9-11, Hollywood studios and major stars were reluctant to set foot in the Middle East. Luxor was the site of a major terrorist attack in 1997, in which some 60 European tourists were massacred by anti-Western gunmen in a horrific bloodletting. And since 9-11, A-list stars were hard to lure anywhere outside the United States. Usually Morocco would pass for anywhere in the Middle East, if it wasn’t Arizona.

There’s more afoot. Another quiet milestone on the road to cultural cooperation with the Middle East passed last month. In 2006 Steven Spielberg was approached by King Abdullah of Jordan to enlist the director’s help in creating a film school for the region. (They’ve known each other since Indiana Jones went thundering on horseback down a mile-long crevice to emerge in front of the temple of Petra, shot on location.) The school, the Red Sea Institute of Cinematic Arts in Aqaba, opened in September of this year to no publicity at all. The University of Southern California, where Spielberg is a major donor, signed on as a consultant to create a curriculum for 25 masters’ students from around the region, including Egypt, Kuwait and Iran. The university has recruited instructors too. I’m told that original plans called for Israeli students to be included, but that security conditions ultimately made this impossible. The hope is for Israeli students to be included in future semesters. This is the way to win over hearts and minds in the Middle East — that “soft diplomacy” we hear so much about from Washington and policy wonks, and see so little of.

In the end, “Transformers II” shot for several days, bringing together a crew of 150 Americans and several dozen local Egyptians for an effort that producer Lorenzo di Bonaventura, who called from a cellphone while standing beside the pyramids, told me was “remarkably smooth.”