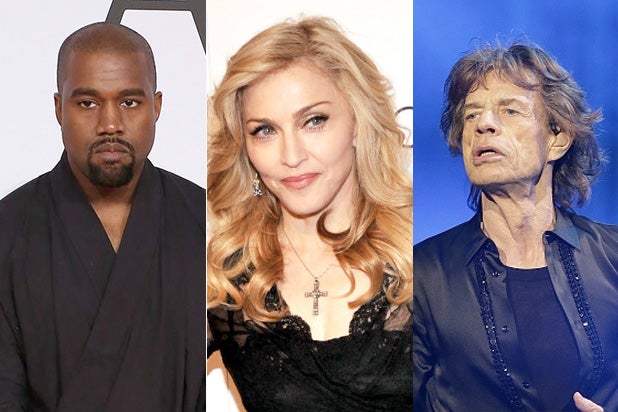 The death of David Bowie on Sunday at age 69 sparked sadness throughout Hollywood as celebrities shared their favorite moments and inspirational quotes online.

“We had so many good times together,” wrote Mick Jagger, Rolling Stones lead singer and longtime friend.

“This great Artist changed my life! First concert i ever saw in Detroit,” Madonna added in her own Twitter tribute.

In addition, Kanye West described the late pop icon as “one of my most important inspirations, so fearless, so creative.”

We had so many good times together. He was my friend, I will never forget him. 2/2 pic.twitter.com/9xfPj88x8b

David was always an inspiration to me and a true original. He was wonderfully shameless in his work. 1/2

So lucky to have met you!!!! Hot Tramp I love you So! #rebelheart pic.twitter.com/INKPRCeofK

David Bowie was one of my most important inspirations, so fearless, so creative, he gave us magic for a lifetime. — KANYE WEST (@kanyewest) January 11, 2016

“But the key to the city is in the sun that pins the branches to the sky…” #DavidBowie — Joseph Gordon-Levitt (@hitRECordJoe) January 11, 2016

"We can be heroes forever and ever." Yes you will David Bowie, yes you will. Icon, artist, inspiration. #RIPBowie

"My brain hurt like a warehouse, it had no room to spare. I had to cram so many things to fit everything in there." https://t.co/ai4FEvPc9H

Be happy we got to share the same life span as David Bowie. The gift from the future. pic.twitter.com/4uumq2tBcg

On top of everything else @DavidBowieReal did—he was also very funny–(courtesy of @rickygervais thank you) https://t.co/MJMtmdck5h

I am still in shock. Never saw it coming. My deepest condolences to Iman and the family. An amazing life. An amazing career.