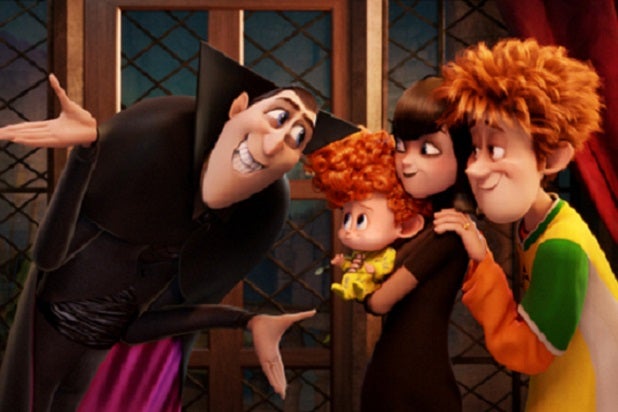 The family sequel “Hotel Transylvania 2” proved a box-office monster this weekend, scaring up an impressive $47.5 million to claim first place and break the record for best September opening ever.

Sony Animation’s 3D CGI comedy knocked “Maze Runner: The Scorch Trials” out of the top spot and three other wide openers — the Robert De Niro-Anne Hathaway comedy “The Intern,” the mountain climbing saga “Everest” and the cannibal horror film “The Green Inferno” — didn’t have a ghost of a chance.

The big debut by the PG-rated “Hotel Transylvania 2,” directed by Genndy Tartakovsky, comes at a great time for distributor Sony Pictures and Adam Sandler, who provided the voice for the Count Dracula character that runs the film’s resort for monsters. It’s the biggest opening ever for the comic actor, who has been battling a slump at the box office and whose last film “Pixels” disappointed for Sony this summer.

“Hotel Transylvania 2” blasted past the September record held by the original film, which opened to $42 million on this weekend in 2012. That one went on to take in $356 million globally and is the highest-grossing film ever for Sandler, who co-wrote with Robert Smigel.

“Hotel Transylvania 2” gives Sony, which is still recovering from last fall’s catastrophic computer hack, its third No. 1 movie in the last four weeks after the low-budget Christian film “War Room” and thriller “The Perfect Guy.” Made for $80 million, modest by animation standards, it will be a big financial win for the studio. And while there was no announcement Sunday, the strong showing virtually assures there will be a third film in the series.

“It’s a really great feeling for us,” Rory Bruer, Sony’s worldwide distribution president, told TheWrap. “The international numbers make it even better.” The sequel will be No. 1 in 33 of the 37 markets in which it debuted this weekend, and will more than double the take of the first film in comparable territories.

“Hotel Transylvania 2” benefited from being the first new animated movie since July, and there won’t be another until “Peanuts” in November, so it should play steadily. It received an “A-” CinemaScore from the mainly family audience, which was 59 percent female and 60 percent under 25.

“The Intern” also received an “A-” CinemaScore, but its audience was far older, with a whopping 89 percent over 25 and 55 percent over 50. That should help it play steadily with the mature crowds the comedy targets, who tend not to rush out for openings.

The PG-13-rated “Everest” took in $13 million during this weekend’s wide opening, but if you add in the $7.2 million from last week’s exclusive 545-theater IMAX and Premium Large Format run, it’s over $20 million. Universal’s distribution chief Nick Carpou declared the unprecedented early-IMAX experiment a success Sunday.

“It’s a solid start for us and just felt right for us given the nature of the film,” he said. The spectacular natural vistas of “Everest” were a natural for IMAX, which made up 19 of the film’s top 20 theaters. The mountain-climbing saga is directed by Baltasar Kormakur.

The R-rated “Sicario,” the drug war thriller starring Emily Blunt, Benicio del Toro and Josh Brolin, had the top per-screen average this weekend at $30,000 after taking in $1.8 million from 59 locations, up from six in its debut last weekend.

Johnny Depp‘s R-rated mob drama “Black Mass,” which was No. 1 at the box office from Monday to Thursday, dropped 50 percent from its debut last week to finish fifth with $11.3 million for Warner Bros.

The overall weekend was a strong one, up 28 percent from the comparable frame last year. The year remains on pace to be the biggest ever at the domestic box officer, and it is up more than 5 percent over last year.