Adam Sandler‘s voice work as Count Dracula was a big reason for the $47.5 million opening of Sony Animation’s “Hotel Transylvania 2.” The animated family sequel is the comic actor’s best debut ever and a record for a September opening.

The win after a string of box-office misfires seems to prove the axiom true that Sandler performs better when he’s heard and not seen.

The actor-producer’s recent disappointing live-action work includes this summer’s “Pixels.” That one, “Blended,” “Jack and Jill” and “That’s My Boy” have on average opened to a decent $23.4 million, but topped out at a so-so $73.4 million domestically.

Those aren’t horrible numbers, and some of the films did better overseas. But they’re not what you’d expect from a star whose 29 films since 1996, including hits like “Big Daddy,” “Happy Gilmore,” “The Wedding Singer” and “The Waterboy” have grossed more than $4 billion globally. While those films were all hits, his highest-grossing movie ever — by a wide margin — remains the original “Hotel Transylvania,” which took in $358 worldwide million in 2012.

“Plugging Sandler into the irresistibly fun and animated world of Count Dracula and his friends is as much of a box office lock as you could hope for and proves that the concept of ‘Hotel Transylvania’ is like catnip to family audiences,” Rentrak senior media analyst Paul Dergarabedian told TheWrap. “Moviegoers now appreciate Sandler’s comedic voice talents aside and separate from his live-action persona,” Dergarabedian said. 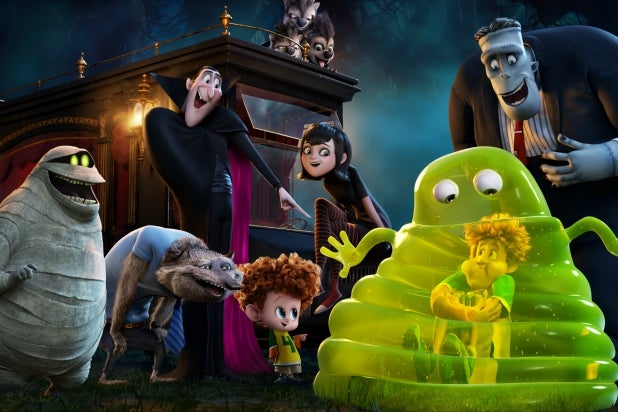 “It’s good to see Adam get a win and it’s well-deserved, because nobody works harder to promote a movie than he does,” Rory Bruer, Sony’s distribution chief, told TheWrap.

The film is good news indeed for Sandler, whose low-brow comedy shtick may have worn thin with some moviegoers. But the two “Hotel Transylvania” movies have over-performed at the box office, and his work in the animated films has even — gasp! — drawn the praise of some critics, who typically love to shred the comic actor.

“It all comes down to content,” Dergarabedian said “Given that his recent live-action work has been relentlessly and enthusiastically lambasted by audiences and critics, his work on the animated side of the ledger has certainly fared much better — and that’s putting it mildly.”

Sandler’s next two films will be the live-action comedies “The Ridiculous 6” and “The Do Over,” the first two titles under his deal to produce movies for online streaming service Netflix.

He has no animated movies scheduled. But given Sandler’s recent box-office results, he might want to reconsider that.