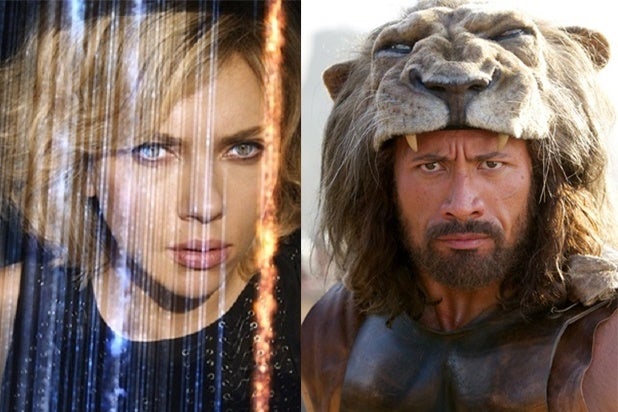 The question isn’t whether Scarlett Johansson‘s “Lucy” is going to beat up Dwayne “The Rock” Johnson’s “Hercules” at the box office this weekend, but rather how badly.

Universal’s sci-fi action film, written, directed and produced by Luc Besson, is heading for an opening in the $35 million range and will unseat two-time champ “Dawn of the Planet of the Apes,” say the analysts. That should easily top Paramount and MGM’s Brett Ratner-directed sword-and-sandals epic, which is projected to land in the $25 million range.

The weekend’s other wide opener — the Michael Douglas-Diane Keaton comedy-drama “And So It Goes” — is in far fewer theaters and will do well to get to $10 million.

The price tags of the two leading films make the impending beat-down all the more embarrassing for the Greek demi-god: the production budget on “Hercules” is $100 million, while “Lucy” cost about $40 million. “Lucy” is going to be a hit for Universal and Besson’s EuropaCorp, but “Hercules” looks like a very long shot to launch a franchise and will need to score big overseas if it is going to recoup its costs. It’s opening in 19 foreign markets this weekend, including Russia, the U.K. and Australia.

In the R-rated “Lucy,” Johansson plays a woman who develops superhuman powers after a drug implanted in her body by the mob leaks into her system, allowing her to use more than the normal 10 percent of her brain’s capacity. Morgan Freeman and Analeigh Tipton co-star.

It’s been tracking strongly for weeks, and the other vital signs are positive as well. Its Facebook “likes” are triple those of “Edge of Tomorrow,” the Tom Cruise sci-fi tale that debuted to $29 million in June. And it was handily leading advance sales at online ticket broker Fandango on Wednesday morning.

“It’s one of the those movies that just looks like fun,” said Exhibitor Relations vice-president and senior analyst Jeff Bock. “The first trailer was really good, and the buzz has been building since.”

Johansson has burnished her action credentials playing the Black Widow in “Iron Man 2,” “The Avengers” and “Captain America: The Winter Soldier.” This role — for which Angelina Jolie was considered at one point — should cement her status as the genre’s new leading lady. A good comp for “Lucy” might be Jolie’s 2010 action thriller “Salt,” which opened to $36 million and went on to take in $294 million for Sony.

If the PG-13 “Hercules” can open to $25 million domestically, it will be a testament to Johnson’s star power. “Lucy” is formidable competition, and the well-reviewed “Dawn of the Planet of the Apes” will draw from the same target audience.

Ian McShane, Rufus Sewell, Joseph Fiennes and John Hurt co-star in “Hercules.” The script, from Ryan Condal and Evan Spiliotopoulos, has the Greek strongman coming to the aid of his daughter and the King of Thrace who are threatened by a tyrannical warlord.

Its social media indicators are OK. On both Twitter and Facebook, it’s just behind “Noah,” the Biblical epic that debuted to $43 million against a weaker field in March for Paramount.

This hasn’t been a great year for sword-and-sandals epics. Lionsgate’s “The Legend of Hercules” bombed in January and Sony’s pricey “Pompeii” was puny in February. Warner Bros.’ “300: Rise of an Empire” couldn’t match its budget with $106 million domestically in March, but has brought in $330 million worldwide.

Johnson is a global box-office force, unlike Kellan Lutz, Kit Harington and Sullivan Stapleton, who starred in those films. His last movie was Universal’s ensemble blockbuster “Fast & Furious 6,” and his last starring role was the action sequel “G.I. Joe: Retaliation,” which debuted to $40.5 million in March of 2013 and went on to take in $375 million for Paramount.

But he’s had his misses, too. Last year’s “Snitch” was a disappointment, and 2010’s “Faster” and the kids film “Tooth Fairy” failed to connect.

The PG-13-rated “Hercules” will be in roughly 3,600 theaters, including IMAX.

“And So It Goes” marks the first wide release film for director Rob Reiner since “The Bucket List” in 2007, and will target an older audience.

The script follows self-centered realtor (Douglas) who enlists the help of his neighbor (Keaton) when he’s suddenly left in charge of the granddaughter (Sterling Jerins) he never knew existed. It’s by Mark Andrus, who co-wrote “As Good as It Gets” with James L. Brooks.

Distributor Clarius Entertainment will have it in roughly 1,800 theaters. It’s rated PG-13.