Blake Lively fashion statements are de rigueur on red carpets, but she made one at the box office with “The Age of Adaline” over the weekend.

The “Gossip Girl” star plays a women caught in time at the age of 29 in the romantic fantasy movie. It started fast and even knocked “Furious 7” out of the top spot on Friday, before finishing with $13 million behind the blockbuster and “Paul Blart: Mall Cop 2 ” for the weekend.

Understated and smart is how fashion critics might characterize the opening, and that would work for executives at Lionsgate and Lakeshore Entertainment, who partnered on the $30 million “Age of Adaline.” Lee Toland Krieger directed and Michel Huisman from TV’s “Game of Thrones,” Ellen Burstyn and Harrison Ford co-star.

It could ultimately take in north of $40 million at the box office domestically, if it becomes a solid alternative for grownups as summer’s superheroes and sequels roll out. The “A-” CinemaScore awarded by audiences means positive word of mouth, and it should travel quickly. Social media was how Lionsgate spoke to fashion conscious women, a target audience for “The Age of Adaline,” and the crowed was 78 percent female.

“We were very aware of Blake’s high fashion profile when we crafted the campaign,” said Danielle DePalma, executive vice-president of digital marketing at Lionsgate. “And there was so much beautiful imagery from the film.” 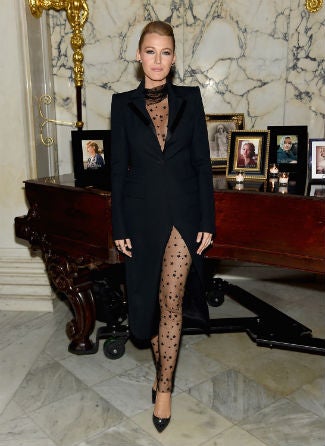 Blake Lively at the “Age of Adaline” after party

Vignettes were created for MTV and VH1, and a custom segment E! News featured fashion from the film, instructing viewers on how they could achieve the same timeless looks as Lively. An Allure Magazine tastemaker luncheon drew the fashion elite, and Vogue Editor-in-Chief Anna Wintour and daughter Bee Shaffer turned out to see their cover girl at the chic Metropolitan Club party following the world premiere in New York.

Digital was the key, however.

“We worked with nine top fashion and beauty stars from YouTube and Maker Studios and created a custom ‘Fashion Journey Through the Decades’ initiative,” said DePalma. Each influencer created a unique makeup, clothing, or hairstyling tutorial video inspired by one of the decade-themed Adaline portraits.

“We worked up a series of video ads that we used to reach young women on Instagram, and we had a ‘how-to’ feature on Pinterest,” said DePalma, “but that was just the start.”

Her team was able to reach 145 million Facebook users by leveraging the most active female-skewing of accounts owned by Lionsgate or its partners, including “The Hunger Games,” “Gossip Girl,” “Divergent,” “The DUFF” and “Warm Bodies.”

Lively, who launched her own lifestyle web site Preserve last summer, and Huisman traveled to San Francisco to visit the offices of Pinterest, Twitter and Popsugar. The team partnered with GILT City to organize advance screenings with fashion and lifestyle influencers, and used Periscope to get the word out. They garnered more than a million YouTube views and another million engagements thanks to the 30 Instagram influencers.

“If you want to see a beautiful movie – watch The Age of Adaline,” posted.Lana Del Rey on Instagram, where she debuted her “Life is Beautiful” music video across her social accounts, including Facebook (11.5 million followers), Twitter (5.4 million), Instagram (3.6 million), YouTube (1.3 million) and Google Plus.

Lionsgate targeted mature moviegoers through AARP, so it’s likely the audiences will be older and more balanced in terms of gender in the coming weeks. But will the fashionistas that drove the opening come back? Will they tell fashionable friends?

“We can see their comments on the posts and on Twitter, and we’ll be able to use everything we’ve set up to amplify them,” said DePalma.

And they’ll do it with style.