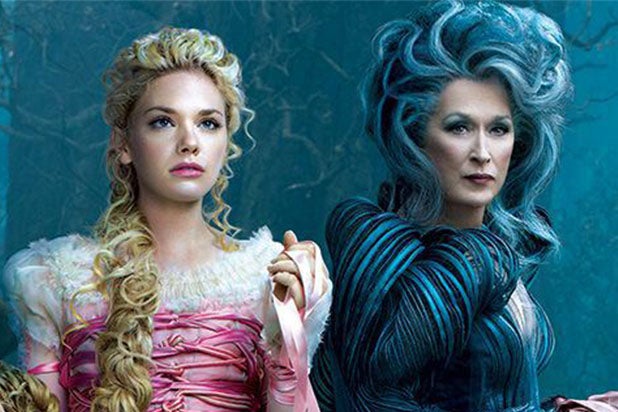 Broadway musicals are no lock to translate into box office success at the movies, but Disney’s star-laden adaptation of Stephen Sondheim’s “Into the Woods” did just that over the holiday weekend — better than any movie-musical ever has.

“Into the Woods” opened on Christmas Day and wound up edging “Unbroken” to finish second to “The Hobbit: The Battle of the Five Armies” with $46.1 million over the long weekend. That included $31 million between Friday and Sunday, giving it the best opening ever for a movie adaptation of a Broadway musical, ahead of the $27 million 2008 debut of “Mamma Mia!,” which went on to take in more than $600 million globally for Universal.

You don’t pull off that kind of first act with just show tunes, and “Into the Woods” had much more than that going for it. Its starry cast and the team of director Rob Marshall and screenwriter James Lapine made a difference, and so did smart scheduling, a family-friendly PG rating and the Disney brand, which has a ton of momentum at the box office right now.

“When you have luminaries like Meryl Streep, Johnny Depp, Christine Baranski and Tracey Ullman, among others, half the work is done,” Dave Hollis, Disney’s distribution chief, told TheWrap. “But this is a hugely talented cast all around, with stars like Emily Blunt, James Corden and Anna Kendrick, who are all on the rise and it’s great timing for them.”

The blend of mature and younger stars mattered. “Into the Woods” played female (54 percent) and older (57 percent over 25), but not terribly so in either case. Sixty-five percent of the audience was under 35 years of age.

“I’m not sure who besides Rob could pull this off,” Hollis said of Marshall, who directed the 2002 Best Picture Oscar-winning “Chicago.” The director was also a producer, along with John DeLuca and Marc Platt.

”The creators of ‘Into the Woods,’ Stephen Sondheim and James Lapine, had an incredible amount of trust in him and it’s easy to see why,” Hollis said. “He is able to perfectly balance the theatricality of the stage production with a cinematic sensibility and the emotional intimacy of the story.”

Lapine, who wrote the book for original production, handled the adaptation for the film himself. But the trip from Broadway to big screen meant dealing with two very different sensibilities. Marshall learned that first hand in 2009, when he directed the musical “Nine” for the Weinstein Company. That one didn’t work artistically or creatively.

“In a case like this, there’s a tricky balance of broadening the appeal for general audiences while ensuring the integrity of the original creation,” Hollis said, noting that “Into the Woods” has a very dedicated core of fans.

“If you have a great story and you get it right, you can bring a broad audience in along with the fan base,” he said. “I’d say we got it right.”

Disney has gotten it right more often than not lately, and it hasn’t all been done with Marvel superheroes, as in “Guardians of the Galaxy.”

“We have a lot of momentum with certain audiences, Hollis said — families, females, adults — thanks to films like ‘Frozen,’ ‘Maleficent’ and ‘Saving Mr. Banks.’”

Opening “Into the Woods,” which had a roughly $55 million production budget, on a very crowded Christmas Day was a gamble, especially with Sony’s family friendly musical “Annie” out there already. But it paid off, in part because Mouse marketers were able to lure more than parents and kids, though families made up 38 percent of the crowd. They gave it a “B” CinemaScore, in line with critics, who have it at 71 percent positive on Rotten Tomatoes.

But the number that matters most is 46, as in millions of dollars in the film’s first four days. That means roughly four times as many people saw the movie version of “Into the Woods” in its first weekend than ever saw the Broadway production.

“This is a beloved story with universal and timely themes, an unforgettable Sondheim score and sensibility, beautifully envisioned by Rob Marshall and brought to life by a dream cast,” said Hollis. “We got our wish. All the pieces came together just right.”