With #OscarsSoWhite more talked about than any of the nominees, Chris Rock‘s opening bit at the 2016 Academy Awards Sunday night will be among the most anticipated in the show’s history. But how much will that help the telecast’s ratings?

A lot, based on past numbers — if interest in what Rock has to say about the controversy translates into high tune-in at the top of the show.

In the past five Academy Awards telecasts, only once have the first fifteen minutes of the show drawn higher ratings than the average for the entire telecast. That was last year, when Neil Patrick Harris hosted, drawing overwhelmingly negative reviews — so bad that when asked in an interview with the Huffington Post whether he would host the show again, he said, “I don’t know that my family nor my soul could take it.” 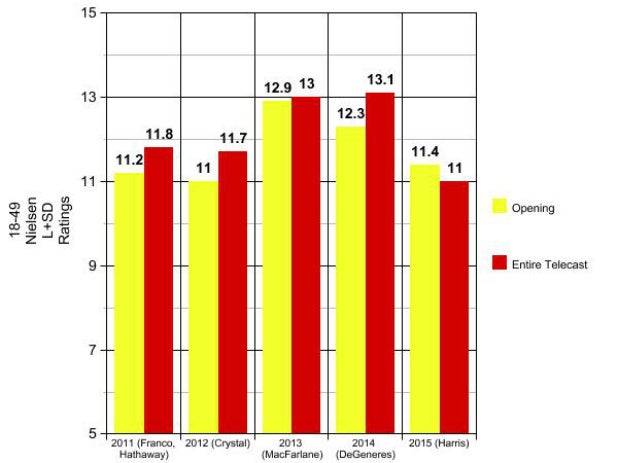 That was the only time in the last five years that the opening outperformed the show overall. In the four previous Oscars telecasts, the show’s ratings built from the opener. But not always by much.

The 2014 show, which featured a well-received opening monologue from host Ellen DeGeneres — as well as DeGeneres’ famous Twitter selfie stunt — drew a 12.3 for the first 15 minutes, and built to a 13.1 for the entire telecast.

That was the most growth for any Oscars telecast in the last five years. The least came the year prior when Seth MacFarlane‘s opening segment included a cameo by William Shatner as Captain Kirk and the much-reviled musical number “We Saw Your Boobs.” The first 15 minutes drew a 12.9 rating. The overall telecast drew a 13.0

With curiosity high over what Rock will say about #OscarSoWhite and the industry’s race and diversity problems, big early tune in for tonight’s Oscars is likely. Hosting for the second time and still at the top of his game creatively, Rock is unlikely to fall short of expectations as Harris and MacFarlane did. Like DeGeneres, his Oscars telecast will likely build significantly in ratings from its opening number.

And that could mean big numbers from Nielsen Monday morning.

To celebrate the move into the Kodak Theatre in 2002, designer Arnold Schwartzman created a set of old-fashioned postcards depicting all 10 Oscar venues