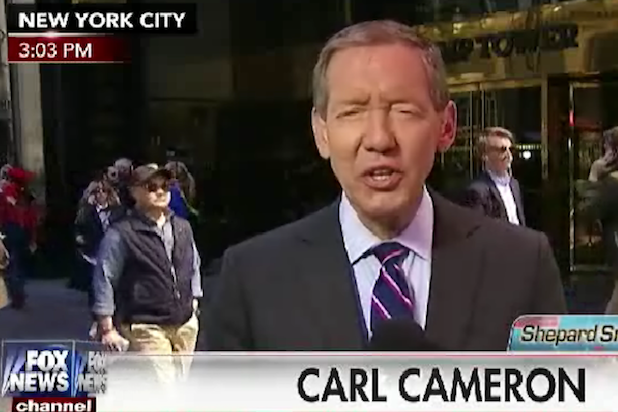 Fox News’ Carl Cameron says he used to drink ten to 15 Red Bulls per day, but had to stop because the crash of coming down from the energy drink made it too hard to cover Donald Trump.

“I’m off the Red Bull,” Cameron, the network’s chief political correspondent, told TheWrap. “This campaign is one of the most exhausting. Every other campaign I’ve covered, we’ve gone out earlier and more often and worked harder [than competitors], not necessarily smarter or better, but I make damn sure I work harder and stay out longer than anybody else. Doing that with Trump has been really, really tough.”

Cameron covers Trump “not out of choice,” but because he’s assigned the GOP frontrunner, whoever he or she is. (This campaign, it’s always been Trump.)

“Following Trump around has been exhausting because of some of the issues with his crowds and also just keeping up with the machine-gun speed with which he fires off tweets and one-liners that require coverage,” Cameron said. “I’ve had to chill out on the Red Bull just to sustain my long-term strength. Those have a short-term cutback. You drink one and you feel exhausted in four hours.”

Red Bull did not immediately respond to TheWrap’s request for comment.

Cameron has covered every presidential election since Fox News launched in 1996 and he covered both the 1988 and 1992 races for local television in New Hampshire. In nearly three decades on the campaign trail, Cameron has never seen anything quite like the presumptive GOP nominee’s strategy.

Cameron explained that it was a “chronic problem” in the early stages of the campaign, but Trump has “gotten a little more disciplined” lately.

“For the first couple of months that I was covering Trump, he would walk up to me and say, ‘Hello Campaign,’ it’s like he kind of forgot what came after that,” Cameron said. “He likes to pick on me occasionally. Most of the time they end up putting it on TV because it’s usually pretty funny.”

Cameron says Trump’s policies and tactics are “fungible, they change” and what sometimes appears to be a hard-and-fast policy is actually a negotiating tactic.

“That’s fascinating and it makes for a lot of motivation to find out what’s going on,” Cameron said. “He’s always been running a general election strategy. He’s always left trap doors in what used to be iron-clad conservative positions.”

“It’s up to whether voters will allow it,” he said.