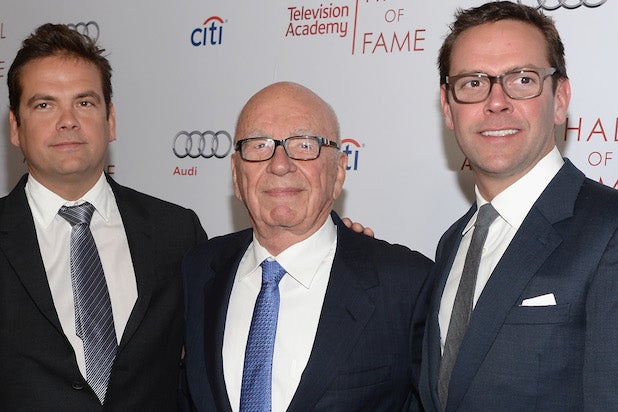 Three years ago, James Murdoch slunk back to New York City from London, his impressive run at BSkyB tarnished by a nasty phone-hacking scandal involving NewsCorp.’s U.K. tabloid newspapers that upended the Murdoch empire and put at risk the inheritance his father badly wanted to leave him: custody of the family media empire.

But the shoe never fell. James, 42, prospered and all is well in the House of Murdoch as chairman-CEO Rupert prepares to step down as chief executive and hand off the title to his younger son.

Fox’s board is scheduled to meet next week to formalize the handoff, which not only installs James atop the company but brings his older brother, Lachlan, 43, back into the fold as non-executive chairman alongside his father.

Lachlan Murdoch, who had been groomed as a successor early on, abandoned the chance when he jumped ship in 2005, moving from New York to Australia to take over the company’s newspaper business there. He is expected to move to Los Angeles in his new role with the company.

Chief Operating Officer Chase Carey, whose contract ends this year, will also step down, leaving the company without a senior manager outside the family for the first time.

That’s a situation that would have spooked Wall Street tremendously as recently as two or three years ago. But James Murdoch has shored up his reputation since then and investors greeted today’s news with enthusiasm and praise for James — although no one contests the fact that he likely would not be in the job if his last name wasn’t Murdoch.

“James was tested at BSkyB and passed with flying colors. He wasn’t very popular when he went on board there and it wasn’t preordained that it would do as well as it did. He made News Corp. shareholders a lot of money,” Larry Haverty of Gabelli Funds told TheWrap.

Since James Murdoch’s return to New York, Haverty added, “People have been impressed with how much he knew about the business and how much he liked it.”

NewsCorp. split in half two years ago, moving all of its entertainment assets into a new company 21st Century Fox and keeping the global newspaper business under the old NewsCorp banner.

Haverty and others on Wall Street are most impressed by how Murdoch has engineered an orderly transition. Family-run businesses often face daunting challenges when it comes to succession, as the the complex situation at Viacom has demonstrated in recent months. Viacom’s chairman, 92-year-old Sumner Redstone, has declined to name a successor — resulting in significant investor anxiety about the futures of both Viacom and CBS.

“I can’t tell you that watching Viacom had anything to do with Rupert’s decision, but I can tell you that over the years they’ve watched each other closely,” said one fund manager who declined to be identified.

“Rupert wanted to ease out with his faculties intact,” another added.

Redstone’s faculties are said to be fine but he’s ill, has difficulty speaking and rarely appears in public.

Executives who’ve worked with Rupert Murdoch expect that he will continue to play a significant role at the company — a point underscored by Fox News boss Roger Ailes’ statement that he would continue to report to the senior Murdoch after the transition.

“Rupert will be around a very long time and not a lot will change,” Chris DeWolfe, former CEO of MySpace told TheWrap on Thursday at the PromaxBDA conference in Los Angeles. “I can’t see him staying away from the company for long.”

In one of his uncharacteristically poor deals, Murdoch famously bought the social-networking site for $580 million in 2005, then sold off for just $35 million six years later.

Also Read: Sumner Redstone Denies He Is Stepping Down: 'I Will Continue to Make All Decisions'

Fox’s new leader, Wall Streeters said, is a less imperious version of his father and seen as a less vicious competitor. “Rupert was in the newspaper wars,” Haverty said. “That’s what they called them, wars.”

James Murdoch may not be an empire builder like his father, who built one of the world’s biggest multimedia conglomerates from his own father’s two-newspaper company in southern Australia.

But as the split of Fox and NewsCorp demonstrated, acquisitions may be less crucial to the operations of a modern media company. “That’s not as important as it was. The empire’s been built,” noted one investor. “James has a good grasp on what makes the company tick: the power of sports, news, and globalizing your content around the world.”

And fund managers noted that both Fox has a deep bench of experienced executives across its divisions.

Twenty-First Century Fox Film CEO Jim Gianopulos, speaking to investors Thursday at the Gabelli & Company Movie & Entertainment Conference in New York, literally shrugged off questions about whether James’ ascension would result in changes for him. “For me?” he asked. “It’s good. I’ve worked with these guys for 25 years.”

News of the coronation made no mention of Rupert Murdoch’s eldest daughter Elisabeth, a talented television executive who sold her company, Shine, to News Corp. but ultimately left the fold and exited the board of directors.

Elisabeth, James and Lachlan will inherit Rupert’s voting interest in the Murdoch Family Trust, which controls 39.4 percent of both companies. Murdoch’s two teenage daughters by his ex-wife Wendi Deng hold an economic interest in the trust but not a vote.

James takes the helm of a company that has been streamlined and nipped and tucked into shape, largely by Carey, who will likely remain for a transition period through 2016. The well-respected financial manager simplified News Corp.’s structure, selling off or rolling up minority interests around the world.

The split of entertainment and newspapers made each company easier to understand and invest in. “The company is definitely more manageable,” Christopher Marangi, of Gameco Investors, told TheWrap.

James’ biggest challenge may be the Fox broadcast network which has struggled despite the emergence of this year’s breakout hit “Empire.” “The network is a mess,” Havery said. “But like any network, it’s only two shows away from moving to the top of the pack. In ‘Empire,’ it’s already 50 percent of the way there.”