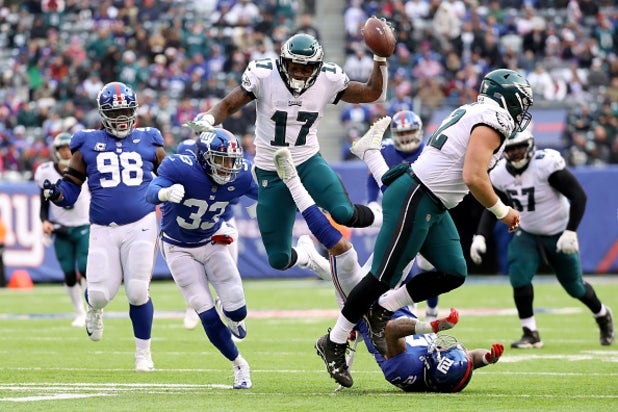 With football season underway, NFL fans are flocking to their TV sets, mobile phones, connected TVs, desktops and laptops waiting for their favorite team to take the field. Tonight’s “Thursday Night Football” game is a face-off between the Philadelphia Eagles and the New York Giants. Kickoff is scheduled for 5:20 p.m. PT at the MetLife Stadium in East Rutherford, New Jersey.

But not everyone has the cash to put down $50+ on a satellite subscription or a ticket to the game. However, with more consumers now turning to connected TVs and mobile devices for their daily dose of entertainment, the National Football League has made it easier for cord-cutters and cord-nevers to get their football fix without emptying out their piggy bank.

While fans can watch this upcoming “Thursday Night Football” game on the NFL Network available on streaming platforms like FuboTV, DirecTV Now, PS Vue, and Sling TV — they all charge a monthly subscription fee. The cheapest of these services is Sling TV, which includes the NFL Network in its “Blue” package for $25 per month. Of course, consumers can get around paying the monthly service fee by taking advantage of the free trial period that most of these platforms offer.

But if $25 per month is still too much or canceling the service after its trial period is too big of a hassle, there is another way to watch the game without spending a dime.

Anyone with a smartphone can download the NFL, Yahoo Sports, AOL or Tumblr mobile apps and enjoy the upcoming “Thursday Night Football” game at no cost. The same goes for all regular season and playoff games, and even the Super Bowl. The NFL announced the news in February.

14 Stars Who Gained Major Weight for Roles, From Charlize Theron in 'Monster' to Christian Bale in 'Vice' (Photos)

Robert De Niro, Renee Zellweger, Ryan Gosling and more put on serious pounds in the name of their art

Daniel Day-Lewis may have gone to extreme lengths as a method actor to portraying a physically handicapped individual or President Abraham Lincoln, but that level of dedication may not be as readily obvious to the average observer. When an actor goes through such a physical transformation that you can hardly recognize them, it's hard to ignore.