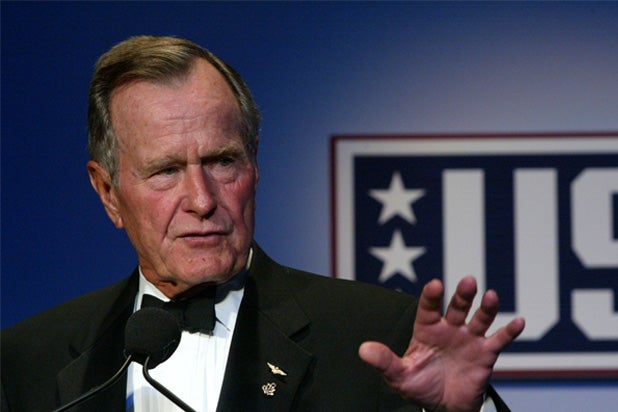 George H.W. Bush, the nation’s 41st president, is being honored Wednesday at 11 a.m. ET at the Washington National Cathedral.

The 94-year-old Bush died on Friday after a long battle with Parkinson’s disease.

While the service is a private event, the public can watch online by tuning into one of the many news outlets streaming the ceremony on YouTube that include The Washington Post, CBSN, CNN, NBC News, Fox News, ABC News, and USA Today.

For those that want to tune in using their TV, major news networks including ABC, NBC, CBS, FOX, and C-Span will also be providing live coverage of the event.

President Trump declared Wednesday a national day of mourning and issued an executive order to close federal offices, according to the White House said.

Bush’s body arrived in Washington earlier this week and had lain in state in the rotunda of the U.S. Capitol building in advance of the funeral.

Bush will later be laid to rest with his wife Barbara, who died in April, and their daughter Robin, who died of leukemia as a child, on the grounds of the George Bush Presidential Library & Museum in College Station, Texas.

The 61st Grammy Awards nominations had previously been scheduled to be announced Wednesday morning but they were bumped to Friday in light of Bush’s memorial.

The oldest U.S. president, who died Friday at age 94, was a big fan of the comedian’s impression

"President George Bush Talks About the White House Drug Problem" (1989) Dana Carvey proved to be a gifted impressionist in his long run on "Saturday Night Live," nailing the cadence of George H.W. Bush's New England speaking voice, as seen in this sketch that runs through multiple issues of the late '80s.
View In Gallery