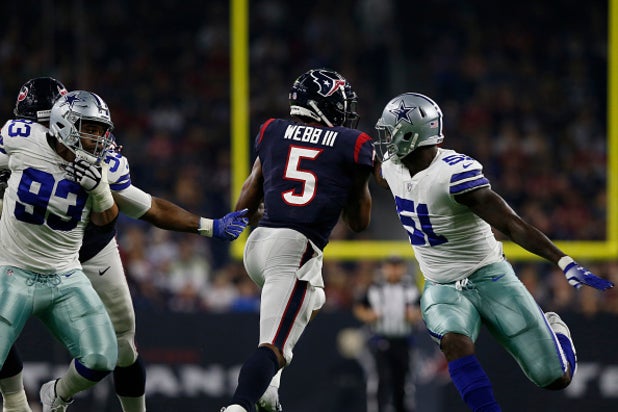 With football season underway, NFL fans are flocking to their TV sets, mobile phones, connected TVs, desktops and laptops waiting for their favorite team to take the field. On Sunday night, the Dallas Cowboys will take on the Houston Texans at 5:20 p.m. PT at NRG Stadium in Houston, Texans.

Of course, not everyone has the cash to put down $50+ on a satellite subscription to watch their favorite team play. But with more consumers now turning to connected TVs and mobile devices for their daily dose of entertainment, the National Football League has made it easier for cord-cutters and cord-nevers to get their football fix without emptying their piggy bank.

Also Read: Brett Kavanaugh Says He Was a Virgin at Time of Accusations; Critics Say It's Irrelevant (Video)

While fans can watch this upcoming game on the NFL Network available on streaming platforms like FuboTV, DirecTV Now, PS Vue and Sling TV, they all charge a monthly subscription fee. The cheapest of these services is Sling TV, which includes the NFL Network in its “Blue” package for $25 per month. Of course, consumers can get around paying the monthly service fee by taking advantage of the free trial period that most of these platforms offer.

But if $25 per month isn’t in your budget or canceling the service after its trial period is too big of a hassle, there is another way to watch the game without spending a dime.

Anyone with a smartphone can download the NFL, Yahoo Sports, AOL or Tumblr mobile apps and enjoy the tonight’s game between the Cowboys and the Texans at no cost. The same goes for all in-market and national games, including regular season and playoff games, and even the Super Bowl.

Beatles’ album has influenced other artists

The Beatles' iconic album, "Sgt. Pepper's Lonely Hearts Club Band" was released 50 years ago. It has inspired a whole host of other artists -- both musically and artistically. In celebration of its landmark anniversary, here are five albums that derived inspiration from the "Sgt. Pepper's" cover.