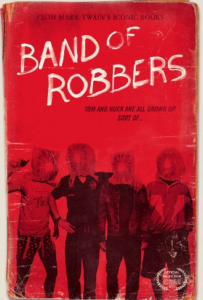 Brothers Adam and Aaron Nee wrote and directed the indie movie, which premiered earlier this year at the Los Angeles Film Festival. Gravitas Ventures will release “Band of Robbers” in select theaters and on VOD on Jan. 15, 2016.

Mark Twain’s infamous young heroes Huckleberry Finn and Tom Sawyer spring back to life in “Band of Robbers,” now as grown men in current day. When Huck is released from prison, he hopes to leave his criminal past behind, but his lifelong friend and corrupt cop, Tom Sawyer, has other plans. It’s time to band together a group of their misfit friends to hunt down the hidden treasure that has eluded the boys since childhood.

“We couldn’t be more thrilled about partnering with Gravitas Ventures on the release of ‘Band of Robbers,'” the Nee brothers said in a joint statement. “The passion, care and insight that Nolan Gallagher and the rest of the Gravitas team have shown immediately set them apart from the pack and proved the perfect partner to bring the film to viewers.”

“We are excited to have been able to acquire the rights to Aaron and Adam Nee’s groundbreaking film,” said Julie Candelaria, senior VP of marketing at Gravitas Ventures. “We are certain the pitch perfect performances by Kyle Gallner, Adam Nee, Matthew Gray Gubler, Stephen Lang and Melissa Benoist of Mark Twain’s iconic literary characters will captivate everyone as it has captivated us.”

The deal was negotiated by Nolan Gallagher and Michael Lange from Gravitas Ventures, and by both Will Lowery from APA and Ramo Law on behalf of the filmmakers.