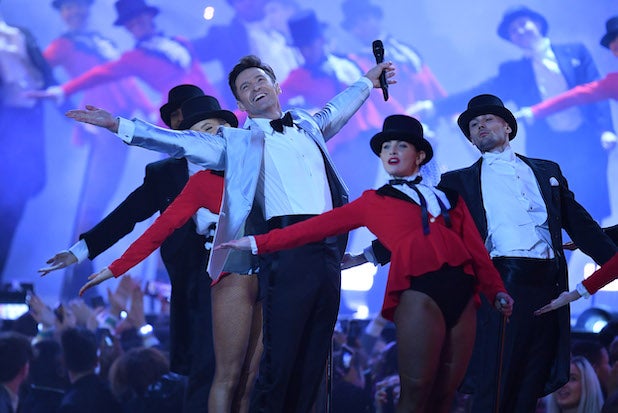 Hugh Jackman will return to Broadway to star in the 2020 revival of “The Music Man,” producer Scott Rudin said on Wednesday. Jackman will play the beloved and coveted role of Professor Harold Hill in the latest version of the Meredith Wilson classic.

This “Music Man” will be directed by Jerry Zaks with choreography from Warren Carlyle. Performances are slated to begin on Sept. 9, 2020, with the official open set for Oct. 22, 2020. We’re not sure yet which theater the new “Music Man” will inhabit, but it’ll be a Shubert.

Jackman, who has played Wolverine in the “X-Men” films and starred in the 2012 big screen adaptation of “Les Miserables,” won a Tony Award for 2003 play “The Boy From Oz.” He was also the centerpiece of 2017 musical movie “The Greatest Showman,” portraying P.T. Barnum.

Additional casting, including the role of “Marian,” will be announced later, producers said.

Also Read: 'Nashville' to Be Adapted as a Broadway Musical

“The first musical I was ever a part of was the phenomenal ‘The Music Man,'” Jackman said on Wednesday. “The year was 1983, and I was at Knox Grammar School in Sydney, Australia. I was one of the traveling salesmen, and I think I can actually (almost) remember that unforgettable opening number! That was probably the moment when the magic of theater was born in me.”

“The idea of bringing ‘The Music Man’ back to Broadway has been lurking in the back of my brain for a long time, maybe even for 35 years, and when Scott Rudin called me with that very idea, I was floored,” he continued. “To finally be doing this is a huge thrill.”

“There is just no way to accurately describe the level of excitement I feel about the opportunity to present Hugh in what I think is the best role ever written for an actor in all of Broadway musical theater,” Rudin said. “Although I have spent a lot of time and energy wishing there was a way to stop the passage of time, this is the one moment when I wish it would just move faster. I can’t wait for us to begin working on this together in earnest.”

“The Music Man” debuted on Broadway on Dec. 19, 1957. It went on to win five Tony Awards, including the prize for Best Musical, and ran for 1,375 performances.