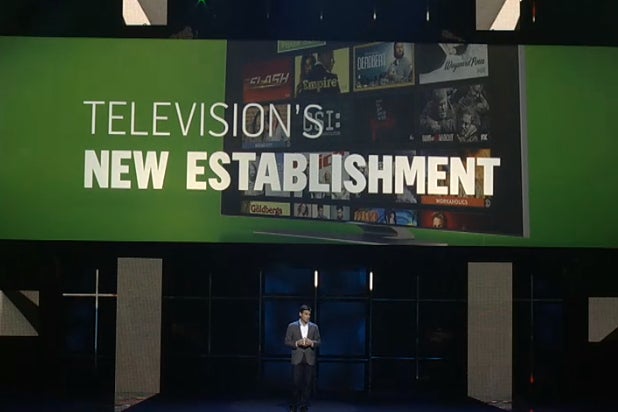 The company also confirmed prior media reports that “Seinfeld” will be coming to the service in June. Jerry Seinfeld was on hand for the announcement, which closed the show.

“If you take away one thing from this morning, know that 2015 is the year Hulu will break out,” Hopkins promised ad buyers and press upfront at the upfront.

The AMC deal will secure the licensing rights for new and upcoming AMC, IFC, BBC America, SundanceTV and WE tv series, as well as a number of movies from the IFC Films collection. Series from those AMC Networks will be available on Hulu prior to each subsequent season’s network premiere.

“AMC Networks has an incredible reputation and track record in producing captivating storytelling across a variety of genres for true connoisseurs of television,” CEO Mike Hopkins (pictured above) said of the new deal. “This huge partnership guarantees that Hulu viewers will soon be able to enjoy the newest slate of premium programming from some of the top cable networks.”

“We believe in the combination of compelling content and technology to engage audiences and deliver viewers back to the linear television experience,” added Ed Carroll, chief operating officer, AMC Networks. “AMC Networks has been the original home of some of the most popular shows in the history of online streaming, and we are excited about this new partnership with Hulu, a growing company that has created a network-branded environment for content in a highly competitive space.”

Before the big announcements, however, it was time for some stats, courtesy of company executives. Hulu’s nine million subscribers have grown 50 percent in the past year, the company boasted. Across Q1, streams are up 77 percent; hours are up 83 percent. All told, that means the average Hulu subscriber is watching 30 percent more on the platform.

Plus, 83 percent of Hulu’s consumers come from TV’s key 18-49 demographic; the median user age is 33. That likely appeased media buyers in attendance.

Then there was other business news: Hulu will be available on Cablevision/Optimum and other platforms this year, Hopkins informed the industry. His company is also dropping the “Plus” from Hulu Plus, he said — it’ll be just plain-old Hulu going forward.

Hulu also teased new product Hulu Insights, which is meant to drill down further into who is watching the company’s programming — a means to further target and measure ad reach.

Here is Hulu’s slate of coming originals, in the company’s own words: