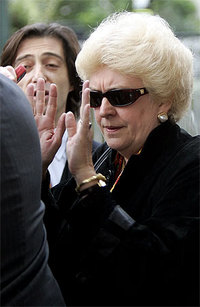 I spoke briefly by phone yesterday to Marion True, the former Getty curator now dangling in the legal winds in Italy and Greece. And I spoke at great length to her friends, dotted around the island. Every story has two sides. Yesterday I heard the story of a much respected, widely beloved scholar who devoted 23 years of her career to improving the Getty’s poor reputation in the museum world by aggressively promoting scholarship, funding conservation all over the ancient world (the Sphinx, for example, in Egypt), giving poorly-paid Greek archeologists grants to study at the Getty institute, holding colloquia like the one to investigate the authenticity of the Getty’s disputed kouros (bought before her time). Her acquisition decisions were reviewed by a scholarly steering committee and approved by the museum director. It was True, they say, who pushed the Getty trustees to announce they would stop buying antiquities in the mid 1990s, because she felt it fed the smuggling trade (her critics say the Getty conveniently did this only after acquiring the Fleischmann collection, a largely unprovenanced group of treasures). Now, the friends say, she has been hung out to dry. That much appears to be true. The Getty is paying for her team of 5 lawyers, but have urged her to keep quiet and not defend herself. Her friends say the Getty’s aim is to protect the Getty, not True. It is a tragic tale, however you slice it: either the insidious corruption of a Harvard-educated, lover of history by the prevailing norms of a see-no-evil antiquities trade. Or the public crucifixion of a competent curator who played by the rules – and the rules lived in a grey zone — and then found herself in the cross-hairs when the rules changed to black and white. No one in Paros, even those who don’t associate with True, think there is any substance to the charge that she had looted antiquities in her Paros home. And yet there are looted antiquities in the homes of wealthy Greeks, all over the country, who are essentially untouchable. I have been thinking a lot of what it must feel like to be Marion True, of the crushing of an individual when institutions collide. Is Marion True corrupt, or is the entire system corrupt? Her friends say she has, at points, been suicidal. There is a visible human cost to the tectonic shifts in the world of patrimony and cultural identity.