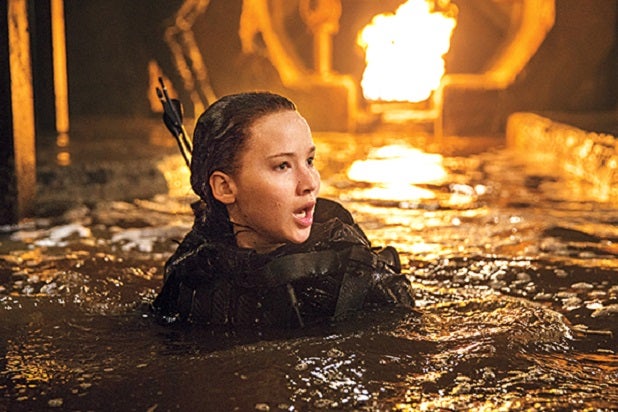 Just what a blockbuster franchise “The Hunger Games” has been came into sharp focus Saturday after “Mockingjay – Part 2” starring Jennifer Lawrence roared to a strong $46 million in its first day Friday, putting it on pace for a $102 million opening weekend for Lionsgate.

The fourth film adaptation of Suzanne Collins‘ best-selling young adult novels will end the two-week reign of James Bond and “Spectre” atop the domestic box office and it’s headed for the year’s fifth-best debut. It also opened at No. 1 in 82 of the 87 foreign markets in which it rolled out and Lionsgate is projecting a global total of more than $250 million for the weekend.

But the Friday total for the finale, which included $16 million from Thursday late shows, was the lowest first day of any film in the franchise, and it’s on pace for the lowest-grossing opening weekend in the series, too.

Nonetheless, “Mockingjay – Part 2” had plenty to put away 007 and the two other wide opening films, Seth Rogen‘s R-rated holiday comedy “The Night Before” and the STX thriller “The Secret In Their Eyes” with Julia Roberts, Chiwetel Ejiofor and Nicole Kidman.

Rogen’s first release since last year’s “The Interview,” which was at the center of the Sony hacking scandal and triggered a war of words between the U.S. and North Korea, didn’t make anywhere near the splash that one did. “The Night Before” brought in $3.65 million Friday and is on course for an $11 million opening weekend, at the low end of analysts’ projections for the comedy which also stars Joseph Gordon-Levitt.

And Roberts’ first thriller since 1993’s “The Pelican Brief” brought in $2.3 million and is looking at $7.1 million for STX. It received a “B-” CinemaScore from audiences, while both “Mockingjay” and “The Night Before” received “A-” grades.

Sony’s “Spectre” and Fox’s “The Peanuts Movie, which have finished 1-2 for the past two weeks, fell to second and third, taking in $4.3 million and $2.9 million respectively on Friday, and will finish with $14,3 million and $12.,5 million over the three days. Sony expects the Bond film to surpass $670 million worldwide by Sunday.

The Weinstein Company opened the Cate Blanchett drama “Carol” in four theaters and it brought in $77,000. That projects to $259,000 for the weekend and a strong per-screen average of nearly $65,000 for a film TWC sees as having awards potential.

Open Road Films expanded its Oscar hopeful “Spotlight” by 538 theaters, from 50 to 598. It brought in just more than $1 million for a solid $1,709 per-location average.

Universal debuted the crime thriller “Legend,” in which Tom Hardy plays the dual roles of gangsters Reggie and Ronnie Kray, to $29,000 from four theaters. That pencils out to roughly $84,000 and a per-screen average of nearly $21,000.

The overall box office was down roughly 12 percent from last year, when “Mockingjay – Part 1” opened to $121.8 million.