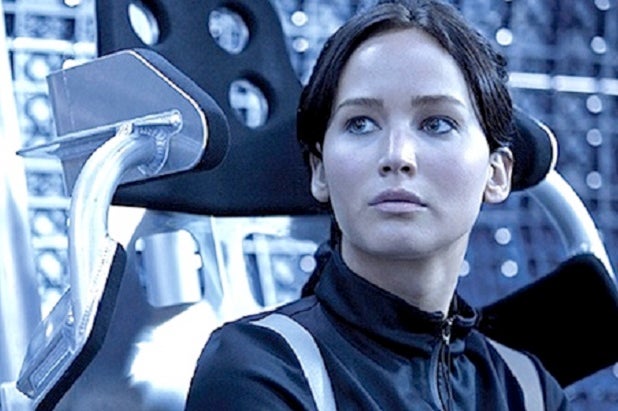 “The Hunger Games: Mockingjay – Part 1” is cruising to its third straight weekend win at the box office after taking in $6.5 million Friday.

That puts Lionsgate’s blockbuster sci-fi saga starring Jennifer Lawrence on track for a $22 million three-day haul, good enough for No. 1 on a weekend that Hollywood pretty much took off. The first part of the franchise finale has taken in more than $507 million globally, with $236 million of that from North America.

With much of the nation sure to be distracted by shopping and the holiday movie season hitting high gear next week, the studios didn’t release any new films widely on Friday. That left the weekend to Katniss and Co. and holdover films looking to find their footing. Two movies that opened last weekend were battling for second.

DreamWorks Animation’s “Penguins of Madagascar” was third Friday, but will likely move into second by Sunday with a boost from the family crowd and finish with around $10.4 million. That would be a steep 59 percent drop from last weekend for the 3D family film distributed by Fox, and leave it with a soft $50 million domestic total after two weeks.

“Horrible Bosses 2” was second with $2.7 million Friday, and Warner Bros.’ R-rated comedy sequel will finish the three days with around $8.6 million. That would be a roughly 44 percent drop from last weekend that would put its domestic total at $36 million after two weeks.

Christopher Nolan‘s space epic “Interstellar” was fourth Friday with $2.1 million and is looking at a $7 million fifth week for Paramount, which would up its domestic total to $158 million.

Disney Animation’s “Big Hero 6” was fifth with $1.8 million. That puts it on pace for an $8 million fifth week that would give it a $177 million domestic haul.

Universal’s “Dumb and Dumber To” came next and will finish the weekend with around $3.7 million, followed by Focus Features’ Stephen Hawking biopic “Theory of Everything,” which is looking at $2.6 million for the three days.

“Gone Girl,” “Birdman” and “St. Vincent” rounded out the top ten. It’s the tenth consecutive week in the top ten for Fox’s David Fincher-Ben Affleck murder mystery, and “Gone Girl” will end the weekend with a domestic haul of more than $162 million.

Fox opened “The Pyramid,” a low-budget found-footage horror film, on 589 theaters and it brought in $458,000 Friday. It will finish the weekend with around $1 million.

The overall box office has been slumping, running almost five percent behind last year’s record total, and this weekend isn’t going to reverse that. It’s traditionally a slow one. “Frozen” was the No. 1 film last year on this weekend, but didn’t break $10 million.