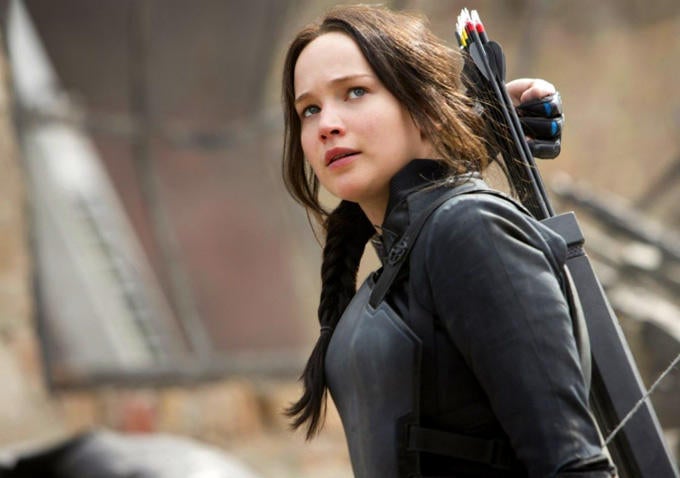 “The Hunger Games: Mockingjay – Part 1” powered to its third consecutive weekend triumph but holiday shopping and college football took a big bite out of the box office this weekend.

Lionsgate’s Jennifer Lawrence sci-fi adventure brought in $21.6 million to easily blast past DreamWorks Animation’s  “Penguins of Madagascar,” which was far back in second with $11.1 million, and Warner Bros. “Horrible Bosses 2,” with $8.6 million.

But with the holiday movie season beginning in earnest next weekend and potential moviegoers sure to be distracted by the malls and the final weekend of college football, Hollywood took a breather. There were no wide opening movies and it showed, with overall grosses down nearly 20 percent from the same weekend last year when “Frozen” was No. 1 with $31.6 million.

“The Hunger Games: Mockingjay,” the penultimate film in the blockbuster young adult franchise, has now taken in $257.7 million domestically. That’s below the $335 million that “Catching Fire,” the previous entry in the series,  had earned at the same point last year.

“Mockingjay” added $31.6 million from overseas and crossed $300 million internationally this weekend, and its global total is $560.5 million.

Disney Animation’s “Big Hero 6” was fourth with $8.1 million and lifted is domestic total to $177 million after five weeks. “Interstellar” was just behind with $8 million, and Christopher Nolan‘s space epic has now taken in $158 million domestically for Paramount. With more than $434 million from overseas where Warner Bros. is distributing, its global total is now $592 million.

“Horrible Bosses 2” held better than any of the top films, falling just 44 percent from its opening weekend. But the R-rated comedy sequel’s domestic total is still just $36 million after two weeks, well under the $60 million that the original film had at the same point.

“Penguins of Madagascar” was off 56 percent, and with a domestic total of just under $50 million after two weeks, it looks like the $132 million Fox-distributed family film is a long shot to hit $100 million domestically.

Universal’s “Dumb and Dumber To” was sixth with $4 million to up its domestic total to $78 million after four weeks.

Also read: ‘Wild’ Review: Reese Witherspoon and Her New Survival Drama Are Both Full of Surprises

Focus Features’ Stephen Hawking biopic “Theory of Everything” brought in $2.6 million from 826 theaters. That’s a strong $3,320 per-screen average and it lifted the awards hopeful’s domestic total to $13.6 million.

“Gone Girl,” “The Pyramid” and “St. Vincent” rounded out the top ten. It’s the tenth consecutive week in the top ten for Fox’s David Fincher-Ben Affleck murder mystery, which brought in $1.2 million, and “Gone Girl” now has a domestic haul of $162 million.

“The Pyramid,” a low-budget found-footage horror film, brought in $1.3 million from 589 theaters in its debut for Fox.