It was no more than a week ago when I advised my own mother to stay away from movie theaters on Christmas, breaking years of Jewish tradition. Could you really blame me? A group of hostile hackers had threatened “9/11-style” attacks against theaters that dared to show “The Interview,” a political comedy that the media has transformed from a mere movie into a movement.

While many initially questioned the credibility of these threats, I can’t say I was among them. “Why take a chance?” I asked myself. Who knows what the so-called Guardians of Peace are capable of? However, once the U.S. government publicly stated that there was no evidence of an imminent attack on U.S. theaters, I knew there was little to worry about and proudly bought four tickets to see “The Interview” on Christmas Day.

The hackers’ threats ultimately proved to be baseless, but I wasn’t surprised to learn that the three grown men with whom I attended the film were nervous about going to the theater. Before seeing the movie, one of my friends said the movie felt “patronizing” and “antagonizing” and worried that a supporter of North Korea could exact revenge at a screening, recalling the Aurora tragedy.

Rational or not, my friends’ fears were understandable, but with nothing else to do on Christmas, we decided to attend the 4:20 showing at The Crest in Westwood, where there appeared to be no visible increase in security. I overheard a theater manager explaining to one concerned patron that there were no problems during an earlier showing and, thus, no reason to worry.

The Channel 2 news was interviewing ticket buyers and, having an idea what they were after, I volunteered to brave the cameras sans hair and makeup. The reporter was surprised to discover I had already seen the movie — I attended a press screening several weeks ago — but I told him I was there to support co-directors Seth Rogen and Evan Goldberg. “The Interview” made me laugh a lot once and I had returned to laugh again. I also said that while I could certainly understand how some might view the movie as offensive, I believe Seth and Evan had every right to make it. As terrible as the past month has been for everyone involved in “The Interview,” especially Sony, it was also inspiring to see America rally around its release, which has turned into a cause célèbre for politicians, the Hollywood community and the press.

At times like these, humor is important, and perhaps the funniest thing about the scary Sony ordeal of the past month is how a film ultimately paid for by a Japanese company, directed by two Canadians and shot in Canada has become a symbol of American values, including freedom of expression. 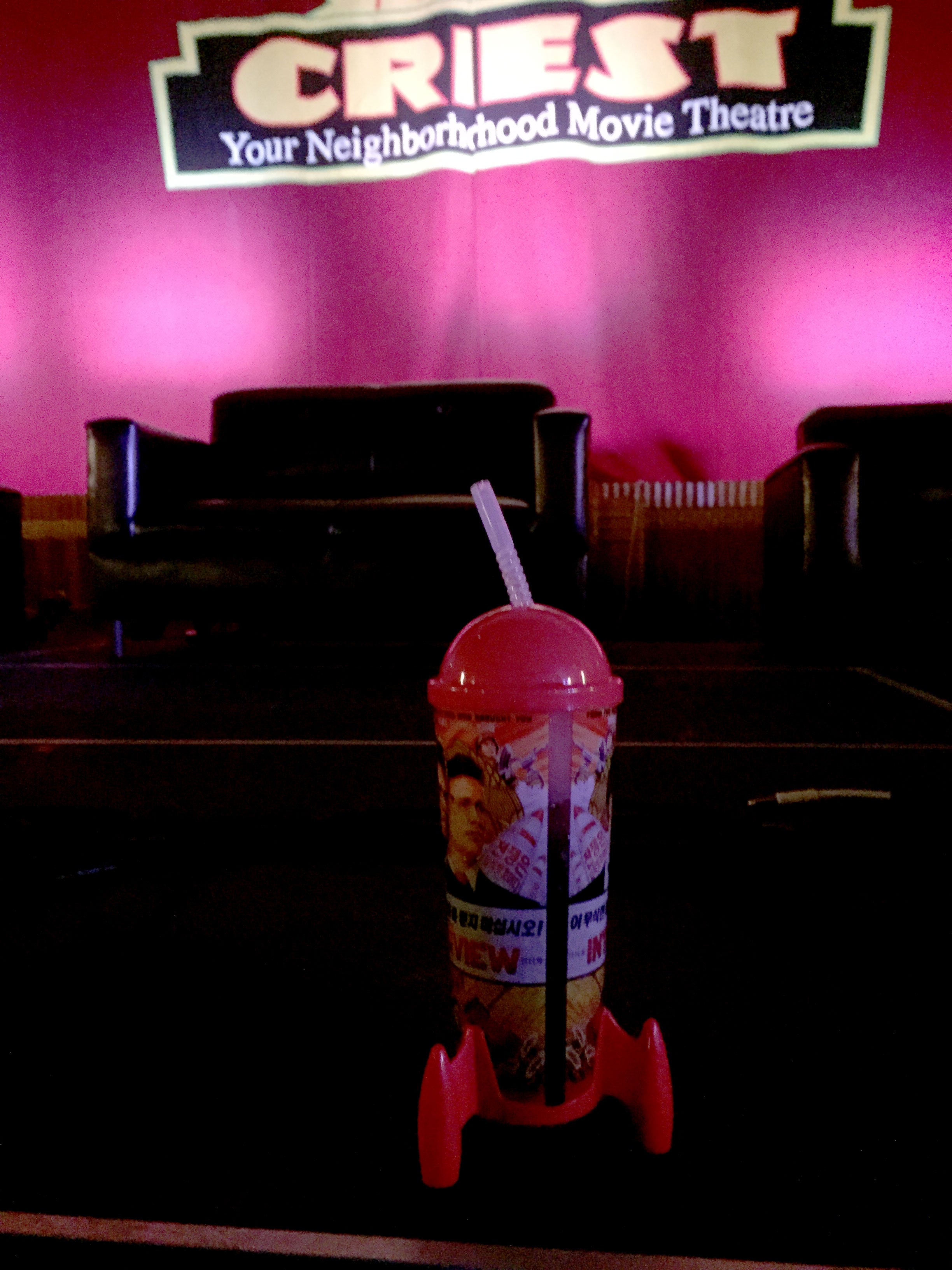 Anyway, we entered The Crest and bought concessions, including $7 rocket-shaped souvenir cups of soda, which will surely be collector’s items in the future. How much would the Supreme Leader pay me for one just so he could destroy it?

The theater was noticeably tense before the screening started. My own friends got into a brief verbal altercation due to one’s considerable height and the addition of several rows of folding chairs, while the people next to me were talking about how they’d heard the film was bad, but they were curious about it given all the media attention and wanted to see it for themselves.

Eventually people started slow-clapping and the entire theater burst into spontaneous applause as the curtains at the front of the house parted. You could tell the audience was ready to laugh.

There were no trailers. Hell, none of the studios deserved the opportunity to advertise their safe wares in front of such a “dangerous” movie, given their partial responsibility for the screen count drop for “The Interview.” The movie opened on 300-plus screens, or approximately 10 percent of the 3,000-plus screens that were originally planned before major theater chains (again, understandably) backed away from the hot-button film.

Rogen and Franco didn’t pop in to rile up the crowd like some of the other prearranged photo ops that other publications have covered, and only half the Crest crowd stuck around for the cute joke after the credits, but the audience seemed to enjoy itself throughout the movie, which earned big laughs at several points. The opening Eminem sequence was particularly popular, as was the unexpectedly gory climax featuring severed body parts.

As someone who had already seen “The Interview” watching it on Christmas through a different sociopoltical lens, the film held up upon second viewing, and I maintain that it says a few positive things about North Korea. The movie features a fun romance between Rogen and Canadian Diana Bang, who plays head of communications for Kim Jong-un. Meanwhile, the dastardly dictator, played to perfection by Randall Park, bonds with James Franco‘s Dave Skylark over Daddy issues and a shared love of American culture ranging from pop star Katy Perry to top-rated sitcom “The Big Bang Theory,” suggesting a common ground.

After the incident-free screening, my friends and I went out for Chinese food at Fu’s Palace, where they each revealed that they really liked “The Interview,” with two of them thinking it was better than Rogen and Goldberg’s last film, “This Is the End.” We should’ve ordered margaritas to commemorate our survival, but you can’t argue with free tea on a cold December day.

“The Interview” is currently available on YouTube, GooglePlay and other digital platforms … as well as select theaters.

Mom, it’s safe to go to the movies. Go have a laugh.