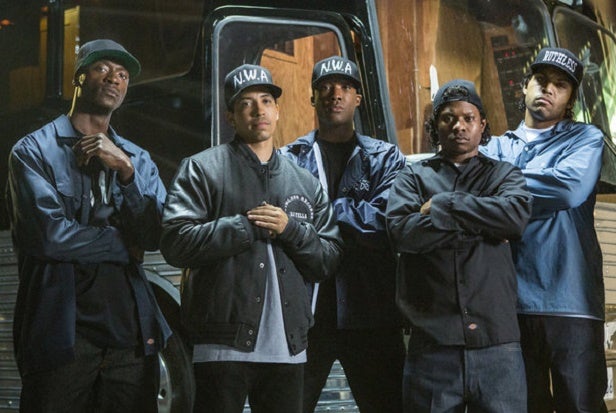 It’s not clear yet whether mainstream moviegoers are ready to embrace “Straight Outta Compton,” the F. Gary Gray-directed biopic recounting the story of N.W.A. The groundbreaking “gangsta rap” group drew the front lines of America’s late-’80s culture wars with profane hits that were filled with calls to answer violence with violence like “Fu*k Tha Police.”

But it’s clear that the fan base for N.W.A — an acronym for Niggaz Wit Attitudes — is mobilized, and analysts say that alone will drive a box office debut north of $30 million, enough to dethrone Tom Cruise’s “Mission: Impossible – Rogue Nation,” when Universal Pictures rolls it out in 2,751 theaters on Friday.

The Guy Ritchie-directed “The Man From U.N.C.L.E.,” an action film starring “Superman” actor Henry Cavill and Armie Hammer based on the 1970s TV show, is projected debut in the high-teen millions.

It will be appropriate if “Straight Outta Compton” scores without the mainstream, being that the debut album of the so-called “world’s most dangerous group” did the same, notching double-platinum sales without radio airplay, MTV or a major tour.

Grammy spots featuring Ice Cube and Dr. Dre, trailers hitched to “Furious 7” and the release of Dre’s companion album on Friday have energized the fan base dominated by young African-American and Caucasian males.

“This movie has a lot of momentum, and the fan base is driving that,” said BoxOffice.com senior analyst Phil Contrino, who sees a debut north of $40 million. “And it feels very close to grabbing the country’s attention, becoming a cultural phenomenon, just like the group did. Beyond the story of the group, the filmmakers wisely focused on the broader themes like free speech, brutality and overcoming tough circumstances that resonate today. This movie is going to get people talking.”

“Straight Outta Compton” has been tracking to open at roughly $30 million for weeks, and is leading advance sales at Fandango and Movietickets.com. It boasts a strong 86 percent positive rating among critics on Rotten Tomatoes and is sizzling on social, spiking on both Facebook and Twitter this week.

There aren’t many films comparable to “Straight Outta Compton.” The 2009 Notorious B.I.G. biopic “Notorious” opened to $20 million, but dropped off the table soon after, topping out at $37 million for Fox Searchlight. “Eight Mile” was based on the rise of Eminem and starred the Detroit rapper. It was a big hit for Universal in 2002, opening to $51 million and going on to gross $117 million domestically and $243 million worldwide. Ice Cube has had several box office hits, including “Barbershop” and 2014’s “Ride Along” with Kevin Hart.

“Straight Outta Compton” doesn’t shy away from N.W.A’s penchant for confronting authority, particularly the FBI and the Los Angeles Police Department, which stepped up security for the film’s Hollywood premiere earlier this week. Whether anxiety over potential trouble, combined with a recent spate of theater shootings, will keep some moviegoers at home remains to be seen, but most analysts expect otherwise.